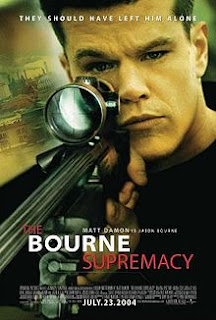 "The Bourne Identity" may not have been intended to kick off a franchise as it worked so well on its own, but the style of the film and its general popularity solidified at least one sequel (it was a sequel in book form first, so they had the ground work if need be). Thusly we are given "The Bourne Supremacy", a sequel that not only succeeds in taking the series in a more serious tone (yay for dark movies!) but increases the acting, script work, and plot to new levels. "Supremacy" should be a 5 our of 5 kind of film. Should be. Too bad Greengrass' pseudo-documentary style of directing is annoying as hell.

Bourne (Damon) has been living out of sight with his love for two years now. Dreams of his past life keep him edgy as memories surge back in brief segments, but his life is moving in the right direction. When he is framed for the deaths of a few CIA agents in Berlin and a mysterious assassin (Urban) kills his lovely lady Marie (Potente), Bourne is thrust back into the espionage game with only one thing on his mind: vengeance for redemption. Now he has to solve a mystery to clear his name and take down the individuals responsible for Marie's death and his current situation.

Score one for dark vengeance films filled with action! With solid performances all around (including some stellar moments with Damon and his torn psyche and quest for redemption) and a great story of spy intrigue and kick ass revenge motives that gives a personal flavor to Bourne's tactics, "Supremacy" is a film that by all means should earn its way up there to one of the best spy films ever made. It's all there. Except that the directing, in all of its modern style glory, is so annoying, that by the end of the film I was ready to strangle Greengrass for taking the film in this direction.

Here's where the film gets messy:

Initially, the shaky damn camera. Although this tactic isn't new by any means, hell it was even utilized for some of the action sequences in "Identity", but the non stop use of it grates my nerves. Greengrass was hired for this ability so I guess he did what he was supposed to, but dammit man. It never stops! When Bourne is sitting at his desk looking in his journal...what does it need to shake?! Of course, it is more subtle here, but this is not a documentary. This is a spy movie and that moment should have a nice revelation feel to it. Yet my focus was on the camera and its jittery shakes. Same goes for the moment where Bourne meets the young girl to confess his sins. That moment should have been powerful enough to bring tears to a viewer's eyes but the relentless shaking ruins it. Damon should be pissed because his performance there is stunning. Too bad I got motion sickness watching it.

Finally, the action sequences. There are some very awesome action sequences in this film. It sort of started a new trend in action films for realistic fights in American action cinema. Too bad the shaky Mr. camera shakes so damn much that one can't tell what's really going on. Then of course, Mr. Greengrass (whom I'm sure you're getting the vibe that I love by now) decides to do as many close up shots on aspects of the action as possible. I get it, he wants us to feel 'in the action', but half the time I couldn't tell what was really going on. I couldn't see it. It was like having an ADD 8 year old with the camera half the time with its quick zooms and extreme close ups of random things like stick shifts and eye brows. So the very awesome knife fight with the assassin or the (could have been) awesome car chase in the tunnel are suddenly turned into a nightmare of lightning quick close ups, rapid fire editing, and seizure-seque handheld inspired camera work. Frustrating for action fans.

The potential for "Supremacy" is so huge and so many elements of the film support its structure that watching this film destroy itself with its pseudo-documentary style is almost too horrifying to watch without crying. If I could somehow make the screen on your computer shake violently as you are reading this review, I would do so just to show you the frustration I had with this movie. A fantastic film that's turned completely mediocre by a style that may please the younger viewers, but certainly alienated this action film connoisseur.