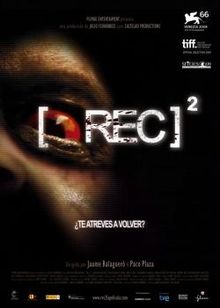 With "[Rec]" and its sudden world wide appeal (with help from the remake in the US "Quarantine"), it didn't seem like it should have taken as long as it did for a sequel to appear. Yet in the US the film took way too long to finally get released (its theatrical release in the US was pathetic), but when it did...wowza. Thusly, this review of "[Rec]2" is finally here and if you loved the first film, then this is a must buy now. The film is different that I expected, but still a riot to watch.

Only minutes after the events of "[Rec]" end, a SWAT team lead by a medical officer are sent into the quarantined building to investigate the events that have and are occurring and to follow orders from the medical officer to complete a mission not quite known to the tactical unit. Inside their discover the spread of an unknown contagion, turning the residents into aggressive maniacs, but what they finally uncover about this infection will blow their minds and perhaps lead them into realms not explored.

How far can one take the handheld camera style with a direct sequel? That question plagued my thinking until the film began to roll. Turns out directors/writers Plaza and Balaguero not only figured out how to change up the style into new and clever ways, but ways to take the plot to whole new and scary places. In fact, I was insanely impressed with the directions that these two took "[Rec]2" and their amazingly thought through effort is the highlight of this film.

The addition of a SWAT team as our lead protagonists certainly changes how the film paces itself and the directions it movies. "[Rec]" focused on realistic people and tensions as ground work for its horror style whereas "[Rec]2" moves towards a more frantic and, dare I say, violent road with the tale. It starts off in the middle of the action and the film never quite lets up from there. More gun play, more creepy zombie attacks, and more high adrenaline situations (including a very high anxiety trip into duct work with some creepy kid like zombies) make up for the films lacking atompshere and play it off in spades. It even adds in more camera angles (including jumping from the main camera to helmet cams on the SWAT team members and even a handheld by some kids who sneak into the building) to add to its more frantic leaping style.

Of course, one of the highlights of the original one was its well built and oddly subtle story line of this spreading infection. This film (just like its style) takes off where the last one left it and runs with it...in some very odd and rather horrifying directions. I certainly don't want to give too much away here, as many of the revelations are really out of left field, but the religious undertones of the original give way to broad strokes of overtones here. To some pretty solid effect.

My one complaint with "[Rec]2" and the reason it doesn't quite make the same rating as the original one has to do with its actors. They just were not as strong or well rounded as ones previously. We don't quite get the arcs we need to really, truly give a rat's pajamas about them (the concept of starting right where the first one left off hinders this) and it does make for a film that isn't quite as impactful.

"[Rec]2" is still a more than stellar sequel that takes the series to new heights and different paths of horror. It's frantic and epic both in style and story and certainly one of my favorite releases of the year. Not quite as amazing as the original, but a sequel more than worth purchasing and watching again and again.

Written By Matt Reifschneider
Posted by DarkReif at 3:30 PM