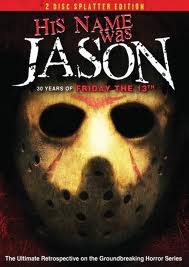 *Note: This review only covers the main feature of "His Name Was Jason" - not all the bonus material available on the 2-Disc version - which is a MUST HAVE for fans.

What could be more fun than watching a documentary on the "Friday The 13th" franchise, right? We have a very long running series that has inspired all sorts of media frenzy with little effort expect in horrifying audiences with a slew of spectacular kills and a villain made hero by its fan base. This documentary should enlighten the fans to all sorts of fun knowledge and viewpoints from those involved.

"His Name Was Jason" certainly does all of this...to a certain degree. We get great interviews with actors from the franchise, directors, writers, make up effect artists, and even 'experts' including Joe Lynch ("Wrong Turn 2") and Adam Green ("Hatchet") who enlighten the audience with how the "Friday The 13th" franchise worked it's magic on them. Not only that, but we get clips from the series, some clever quips, and information about why the franchise has survived as long as it has. All hosted by Tom Savini - a true master of the genre.

It's just not enough though. It's run time clocked in at around an hour and thirty minutes (for the main feature). Do the math. Hour and thirty and we have a dozen films to cover? Not to mention covering the outside aspects of the critics, media, and Jason as an iconic figure? This means that "His Name Was Jason" has to fly at the speed of light to only cover the basics. We get surface level things (for the most part) about the franchise with no time to really dig into the whys, whos, and wheres of why this series became a true cornerstone of the horror genre.

The documentary is fun, I loved seeing what the outsiders had to say bout it - particularly with new genre icons like Green and Lynch, but the limited run time with the amount of ground it needed to cover is simply not enough. What they do cover is a solid surface level run, but long time fans like us here at Blood Brothers are already going to know these things. So its a refresher course. Mostly for fans, but only for the die hards who will buy anything with Jason's hockey mask attached.