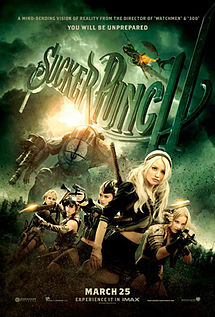 Zack Snyder is a man after my own heart. He does a decent job updating "Dawn Of The Dead", makes a visual feast out of "300", and keeps it true with a capital 'T' on "Watchmen". That's why "Sucker Punch" was supposed to be an epic film of glitz and action. Key word: supposed. Not that the film is horrible, it certainly strikes out to visually captivate and stun, but it's lacking depth and coherency undermines the experience. It gets the job done with enough style and flair to showcase Snyder's visual directing strengths, but it also fails to deliver on the more intelligent scripting levels it needed to to be the film it desperately wanted to.

Babydoll (Browning) has little time to do what needs to be done. After accidentally killing her sister while trying to save her, she is committed to a mental hospital and sits on a list to be lobotomized...very quickly. So she plans to escape, but she can only do it with the help of some of her fellow femme fatale sisters who favor her plan. With the help of a grand scheme, some items, and a very vivid imagination that takes her to new realms of fantasy, Babydoll just might make it out....

The entire time I was watching "Sucker Punch", I felt disappointed. The story just wasn't where it needed to be for it to work like it wanted. The character development is weak, the acting is mediocre (particularly from our leading ladies), and the duel reality plot fizzes in and out with the detailing character play. For a film that needed this parallel universe gimmick to be its center (with the reality of her mental institutional prison and the brothel), the film rarely gives us enough time jumping back and forth between the two to justify its means. You understand what is happening, but the trick isn't as clever as the film seems to think it is. Partnered with the weak character arcs and interactions, the basic foundation of the film is rocky at best and not enough to build the epic film it wanted to be on top of it.

What does make "Sucker Punch" a fantastic watch is Snyder's style as a director. Even if his writing is mediocre at best, he knows what he wants it to look like and pours the fantastical elements on in heaps. The opening prelude of Babydoll's incarceration is artsy in all the odd modern ways with its focus on the music and limited on scene dialogue and, of course, the action sequences for the escape attempt are jaw dropping. When I was told Snyder threw everything in but the kitchen sink, they weren't lying. Twenty foot tall samurai with gatling guns, undead Nazi robots, exploding zeppelins, cybernetic soldier robots, a dragon/helicopter chase...damn...this guy knows how to pierce the cult film fan's heart! The robot fight on the train is wicked awesome with its limited edits and swirling camera shots and the the extensive CGI work is well done enough to even ice over my classic special effect loving soul.  Although many are yelling out about watching young women in tiny skirts blow up shit and kill more shit, I think Snyder knew that ten years from now, these kinds of moves would make this film a cult classic, even if the critics now hammer it with poor ratings.

The bottom line remains that "Sucker Punch" is just a mediocre film. Although as much fun as he must have had with the visual aspects of the film and its artsy cult presentation, the script is under developed and it hurts the film in some big ways. Even the ending (which I'm assuming is the 'sucker punch' of the tale) seems a bit of a missed target as it does seemingly come out of the blue and leave too many things untouched. "Sucker Punch" is certainly disappointing (from Snyder especially), but cult fans will find much to love in its fantasy elements. Undead Nazi robots....not near enough of those in film.

BONUS RANT: I accidentally caught the theatrical version of the film rather than its extended cut. From what I hear, the extended cut is much better. When I get around to watching the extended cut, I will post the reaction on the bottom of this review to see if it improves the overall quality of the picture.