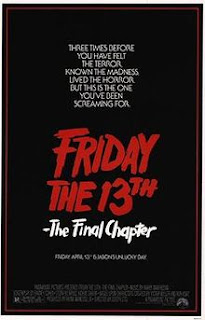 By the time that the third "Friday The 13th" film was released, the series was already just going through the motions. The third one added the gimmick of 3D and was certainly over the top in its attack on the slasher formula (much to its benefit). Thusly, this 'final' entry of the series returns to a more serious and less ridiculous tone (not much to its benefit), but remains steadfast in its formulaic style. Creating a film that has some great moments, but fails to match its three predecessors.

The day after the events of "Part III", Jason is proclaimed dead and taken the the morgue...where he promptly isn't dead, slaughters a few medical practitioners and proceeds to head back to Crystal Lake for some reason or another. There Jason finds a family on vacation and a slew of young and immoral teens renting the house next door. Queue killing spree. Will the youth of Jason's final rampage be able to stop this killing monster man...again?

One of "The Final Chapter"'s biggest flaws is that it's afraid to run with its plot. The plot is basic, Jason kills more people as they fight to survive, but there are some smart moments of plot progression that the film fails to grab onto. The brother hunting down Jason for his sister's death (which is used as a main story line in the "Friday The 13th" remake) and even the Tommy Jarvis sub plot are horrendously underused and could have made for some heroic and interesting twists in the tale. As is, most of the major interesting plot points just seem random like Tommy's transformation at the end seems a bit out of the blue. These all take a back seat to boobs and blood though as the series struggles to keep its audience without pushing the limits too far.

That being said, the film seems even slightly more brutal than it's previous entries. Jason does some wicked shit (like corkscrews a guy to a door frame to hang there before ripping him down like a bad birthday party decoration) and gets nailed with some heavy blows. The knife shot that cuts down the middle of his hand is wicked and his eventual "death" at the end is pretty vicious.

"The Final Chapter" succeeds in some snazzy shots (like the death of the first twin done as that moving shot with shadows in the rain) and some brutal deaths, although it gets a bit tiring seeing people and dogs fly through windows in slow motion, but overall fails to captivate and grasp the plot where it could have. Not to mention it has some unfitting ridiculous moments that leave one laughing unintentionally that didn't quite fit the tone of the film. All in all its a standard slasher that succeeds on some levels but fails to go where it could have with its story.

BONUS RANT: I thought the title sequence to the third film was bad, but the fire exploding hockey mask for this one gives it a run for its money. Yipes that was ridiculous and intense!

Written By Matt Reifschneider
Posted by DarkReif at 11:47 AM