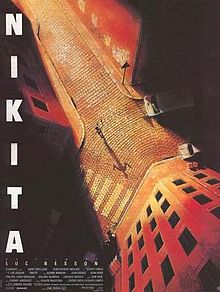 As a cult film fan, I hang my head in shame for just now getting to watch the mesmerizing "La Femme Nikita" (as its known in America). I've been a Luc Besson fan for far too long to not watch this tour de force of art house action that this film represents. Scoff at me if you will, but it eventually came around and "La Femme Nikita" has proven its cult status as a must have for action/drama films.

Nikita (Parillaud) has had it rough. When she kills a police officer in a drugged out rage after a brutal gun fight between police and her gang friends during a robbery, her life just gets a little bit worse. She is sentenced to some serious prison time and with no one in her life to care, her life with her troubled mind is not looking bright. That is...until Bob (Karyo) shows up. He gives her a chance at a new life. Train under him to be a special ops agent. Assassin, undercover surveillance, operations leader. Her sudden knack for chaos and mischief just got a meaning. Can she handle the sudden change of heart and life purpose though?

One of the reasons I kept putting off "La Femme Nikita" was the fact that the story just didn't really intrigue me. It seemed simple and silly. This is where Luc Besson really works this film to the edges and pushes it. The story is remarkably simple, but the rest of the film is extreme. The violence is high velocity and brutal (did I just see Jean Reno poor acid on a living man?!?) and the silence is deep, and dark filled with tension and sorrow. Actress Parillaud makes a rather basic role (that could have gone cheesy far too many times) and turns it on its head leaving us a protagonist that is both completely bat shit insane and yet completely understandable in her struggles. So that by the latter half of the film, as it changes tones and she begins to realize what life she missed out on for so long, we cry with her as it begins to crumble out of her hands.

The film also sports a stunning supporting cast, all of whom steal their respective scenes (including Jean Reno as a really brutal 'cleaner') and with the artful editing process and pacing, "La Femme Nikita" certainly takes a rather basic script and makes it a riveting watch that both entertaining and completely engaging of the full emotional range. As I said before, it's like an art house action film with no hold's barred.

Like "Hard Boiled", "La Femme Nikita" is an action film that rise above the standards with its stellar exectuion one and off screen. Besson works the heart strings for all their worth to surprising effect. The acting, special effects, and action sequences are all worth every second of their screen time. By the time the sudden (and rather frustrating) ending comes about, the audience is just as consumed with Nikita's story as they should be. And then some.

Written By Matt Reifschneider
Posted by DarkReif at 3:20 PM