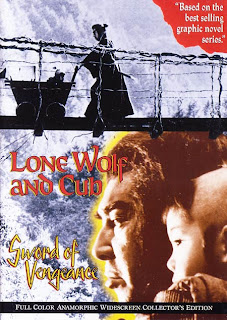 Revered director Akira Kurosawa created the samurai genre with his immortal Seven Samurai in 1954. By the time the 70s rolled around, things were getting bloody, real bloody as the 'slasher' versions of samurai films emerged with Lone Wolf and Cub: Sword of Vengeance being head of the pack shocking audiences with their extreme violence mixed with solid filmmaking. In other words this is the beginning of one of the most kick ass film series of all time!

Based on the popular Manga books at the time, Lone Wolf and Cub is a story about highly trained, noble samurai and son being wrongly accused by a corrupt Shogun. His wife in turn is murdered so Lone Wolf decides to turn to evil, killing without honor and roams the lands pushing his son in a baby cart, selling his skills as an assassin for 500 pieces of gold.

The plot for this film is mostly set for a series that would last an impressive six films (though it pales in comparison to Zatoichi, which lasted for 26 films!). The plot goes to great lengths to develop our lead anti-hero character and his fall from grace making him much more than a roaming Ronin killing for no reason.

Tomisaburo Wakayama plays our Lone Wolf. Though a rather goofy looking fella, don't let that fool you. He's a great actor and fits the role of wonderfully and brings the character's intelligent, yet psychotic nature to full fruition. His intense eyes and wild hair makes the character truly frightening and he is a good runner-up to Toshirô Mifune and Sonny Chiba as most intense bad-ass to emerge out of Japan.

The Lone Wolf and Cub films today are known for their extreme violence, and do mean EXTREME. Blood spurts from every orifice when someone gets stabbed or slashed. We also get plenty of scenes of dismemberment and beheadings! What's so great about this film is that though it is full of exploitative violence, the filmmakers don't shy away from good film-making as Lone Wolf and Cub is professionally made with a keen eye for style and storytelling. It's a well written and shot story with extreme violence added in just to make it that much more entertaining.

Lone Wolf and Cub: Sword of Vengeance is a fatastic film that is the beginning of one of my all time favorite film series. Though not up to caliber of Akira Kurosawa's legendary entries into the subgenre, I might even go as far to say I enjoyed it more as the over-the-top violence was highly enjoyable with-out sacrificing good filmmaking in the process. Five sequels quickly followed and they in order go: Baby Cart at the River Styx, Baby Cart in Hades, Baby Cart in Peril, Baby Cart in the Land of the Demons and White Heaven in Hell. The first two entries in the series would also be successfully edited together and released in America in 1980 as Shogun Assassin, basically keeping all the juicy bits meaning more blood, less plot.