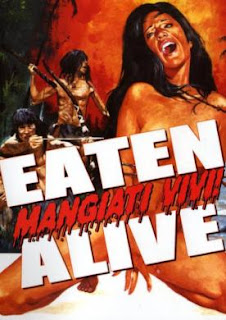 By 1980 the gore was flowing thick off of grindhouse cinema screens as the Italian Cannibal subgenre was in full force thanks to Sergio Martino's "Mountain of the Cannibal God" and Ruggero Deodato "Last Cannibal World" being modest hits with audiences that demanded to be shocked and disgusted. With the Cannibal subgenre being in high demand director Umberto Lenzi decided to revisit the genre he created eight years earlier with "Man from Deep River." Unlike "Mountain of the Cannibal God" and "Last Cannibal World" which had respectable qualities about them, Umberto Lenzi goes the trashy approach to the gives audiences a stock footage filled cheap cash-in, barely eking above such atrocious entries as "Cannibals" and "Cannibal Terror".

The film opens oddly enough in major cities in the U.S. where a wild jungle man is running around killing guys with poisoned darts before getting hit by a bus (cue in unintentional laughter). In his pocket he has the name of a missing women so the authorities notify her sexy Southern Bell sister. She takes it upon herself to travel to Berma, hire a borderline psychotic ex-Vietnam vet, and then trek into the jungle to find her sister that's being held captive by a sadistic cult leader. The kicker... the jungle surrounding the cult's compound is full of cannibals making escape nearly impossible.

What gets me is this film could have been SO MUCH BETTER. "Mountain of the Cannibal God", though not a great film, was competently made and "Last Cannibal World" is actually a good film with Deodato taking a gritty, realistic edge to the subject matter. Not Lenzi. He doesn't even act like he's having fun with the over-the-top subject matter, it just comes off more like he didn't give a shit and only rode the coattails of the genre he created to make a quick buck. His direction is sloppy, the writing is haphazard and the dialogue is banal.

This however isn't the part I hate the most about the film. What irks me is the use of stock footage. Literally every shocking and disturbing scene out of "Man from Deep River", "Mountain of the Cannibal God" and "Last Cannibal World" is recycled here. What's so humorous is Lenzi denies any stock footage was used on the DVD interview. What?! Is he fucking blind?! It's not like the distributors spliced in the footage without his knowledge, Lenzi filmed "Eaten Alive" specifically to splice in these scenes! If you've seen the afore mentioned films then you're going to have a serious case of déjà vu.

The cast however is good with plenty of actors Italian cult fanatics will recognize including Robert Kerman (who made a career of appearing in cannibal films including "Cannibal Holocaust" and "Cannibal Ferox"), the gorgeous Janet Agren ("City of the Living Dead") and what cannibal film wouldn't be complete without Me Me Lai, reunited with her "Man from Deep River" costar Ivan Rassimov as the sadistic cult leader. Thanks to all the stock footage they re-used her death scene from "Last Cannibal World". Cheap bastards! Hell even Mel Ferrer makes a quick appearance as a professor who specializes in cannibalism. Ironically he appeared in Tobe Hooper's American film with the same title 3 years prior to this. How many people can say that they appeared in two separate films entitled "Eaten Alive"? I guarantee you Mel Ferrer is the only one.

This may not be the worst Italian cannibal film, as there are a few that are far worse, but this is hardly a prime example. It lacks the good filmmaking qualities of Deodato's gruesome twosome and it lacks the fun adventure element of "Mountain of the Cannibal God". It even lacks good shock factor as 99% of it's shocking scenes are STOLEN from other films! Do yourself a favor, watch those other films instead. If you have the inkling to see a trashy cannibal flick with shocking gore then skip this one and go straight to Umberto Lenzi's "Cannibal Ferox." At least that film doesn't use stock footage!

Written By Eric Reifschneider
Posted by Cronosmantas at 5:17 PM