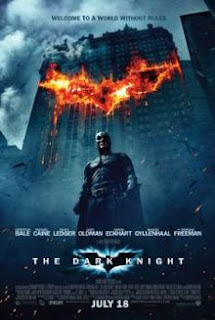 Although the critical praise was pretty universal across the board for the second Christopher Nolan Batman film "The Dark Knight", I am going to go ahead and say that the original 1989 "Batman" was better. Call them fighting words, even though I have to admit that "The Dark Knight" is a good film, but let's look at the film without the blinders of its success critically and financially. Let's look at this second Batman reboot flick as it truly is. A great film that still suffers from flaws carried over by its style.

Batman (Bale) has generally been cleaning out Gotham. With the help of a feisty new District Attorney Harvey Dent (Eckhart) as Gotham's new 'white knight', the two unknowingly have been working in partnership to rid Gotham of its crime problem. The mob is running scared and in their desperation they are looking to anything or anyone to get rid of the Batman to help their cause. They are answered by an anarchical maniac with no name, no record, and no mercy calling himself The Joker (Ledger). Batman may have truly met his match. A man that no detective work or will power can overcome for he has no plan or motivation. Can Batman and Harvey Dent find a way to end the reign of anarchy that The Joker has brought?

"The Dark Knight" continues where Nolan left off with "Batman Begins". The realistic tone is even further embraced in this film (sans the random Bat-sonar contraption brought in at the end, which oddly sits as a very comic book like aspect in a film that tries desperately hard not to be) and the darker tones pushed to their limits with the film's focus on humanizing the characters. Bruce Wayne is given more to struggle with as his role as Batman is questioned by the public and the addition of Harvey Dent and his campaign for justice done in the system gives great comparisons to what Batman's role is as a character and as an ideal. This aspect is well accomplished with the tone and visual style of the film and Nolan nails it.

Again though, like with "Batman Begins", this film gets real damn preachy about viewing all sides of the problem. Monologue after monologue after dialogue after dialogue about justice's role gets to be a little much by the end and certainly rubs this reviewer a bit raw with it's bashing over the head of 'morals'. If only it just told the story and let the subtext do the work rather than having to spell it out for the audience.

Of course, as with most of the critics, I have to agree that the highlight of the film is Ledger's schizophrenic and completely riveting performance as The Joker. His insanely dark (and funny to this guy) take on the great nemesis is an odd mixture of every Joker that came before and done in a whole new light that still amazes and delights me to no end. Every time I watch this film I find myself still completely entwined with his work and it makes for one of the best villains Batman has yet to see.

Unfortunately, with how well Nolan and Ledger crafted Joker here, poor Two Face gets the shaft. The film does an amazing job building up to Harvey Dent's eventual downfall (this is one of the better stories told in the Batman universe), but his bout as Two Face in the finale seems tacked on and too long. It's like two hours is spent building this character and then...that's it. I would have preferred that Two Face's vengeance be saved for another film. It's too good to be wasted as a sub plot in the end.

"The Dark Knight" is a great film and perhaps my second favorite of the live action adaptions for Batman. It's not perfect though and many times I find myself really nitpicking at it because it could have been even better. Sharper. Trimming the fat and focusing down on what this film does so well...giving Batman a real world to live in.

Written By Matt Reifschneider
Posted by DarkReif at 11:38 PM