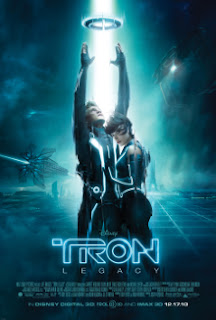 After finally getting to view to the original "Tron" just a while back, it was only fitting that I threw back on the glowing leotard, refreshed my computer tech lingo, and leaped into "Tron Legacy". Fans of the original were hyping it and I'll be damned if the movie didn't look cool. For the most part, it was cool. Although warning be told, you have to see the original to see this sequel. It would have been enjoyable, but most of the best parts were ones that referenced the original. "Legacy" is a blast to watch though with its ridiculous plot and its fantastic visual effects. Fans will certainly enjoy.

Sam Flynn (Hedlund) is torn about his father's sudden disappearance years ago. He may be the major holder of his father's computer corporation, but he disgust with the direction of the company leaves him sabotaging his own company. When his father's friend Alan (Boxleitner) says he received a page from his dad's old arcade, Sam goes and finds a hidden room. There he is transported to The Grid and finds his father (Bridges, reprising his role as Flynn from the original) caught in a war with his digital self Clu and unable to get home.

Who says you can't make a sequel only 28 years after the original? With the first one's cult status and modern technology that allows them to really grab onto the visual aspects of this franchise, "Tron Legacy" had a lot going for it. They ably bring the tale to modern times by basing the film on the original protagonist's son and keep the timeline realistic. This is to the film's benefit and works for what it is.

The visual accent is the (obvious) highlight of "Legacy" with its new and improved technological advances with the style close to 30 years later. The colors of the programs (people) are not seizure inducing this time and the CGI graphics are far smoother. This allows for more fluid action sequences and greater use of the 'games' for more intense moments (like more slow motion!). This, of course, is a highlight as we see the light cycle battles and disc battles in updated ways along with adding in new ways for people to die (as pixels!) like some light plane battles towards the end. The bikes don't have to move in only straight lines, for example. Fans of the original will love the updated styles and the new more fluid and action oriented sequences will keep newer fans hooked too.

The biggest flaw also comes as part of the reason why this film was popular. The story. Although the plot is pretty easy to follow and basic on its own means, if you haven't seen the original then you're shit out of luck. Characters like Tron make appearances without explanation (sans a brief one in the beginning to recap the original as a bed time story) to their relevance and the makers assume you've see the original for moving the picture along. Do they explain how a person gets into the Grid by laser? No. Not well anyway. Do they really explain why Clu is the same as Flynn? Just that he created him. I feel sort of weary for those who didn't watch the original prior as I'm sure its a cluster of names and ideas that aren't full developed. Lucky, I waited to see this after I did view the original.

All in all, "Legacy" is a film that's simply an updated and slightly widened fantasy version of the first. It's still heavily focused on the feel and look of the film (which is only heightened by a fitting score composed by techno group Daft Punk) and although the story is fun and intriguing, it still has a greater concept than what's put to screen. The character arcs and interactions are pretty basic. "Legacy" is a wicked fun watch, but its still not a great movie. Curious to see if the 3D version of the film was worth it.