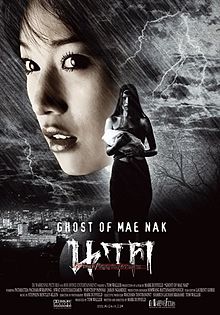 Yawn. How many creepy-woman-with-long-black-hair-Asian-ghost films does one have to see before they become fun and scary again? I thought by waiting for a while and then taking a gander at this Thai version called "The Ghost Of Mae Nak" that I might renew my faith in the style. Nope. At least not with this cliche and overacted film.

Mak has been suffering from nightmares about a pale woman with a black mouth and eyes (and a hole in her forehead). His new bride Nak seems unimpressed with it and they continue on with their marriage and recent purchase of a 'new' house with little thought about it. Too bad as it happens a ghost is haunting Mak and protecting the couple from harm that may come their way. When the ghost of this mysterious woman Mae Nak becomes overly obsessed with husband Mak, the new bride must find a way to rid their lives of this love forlorn spirit before she takes Mak all for herself.

Personally, I don't care if the film is based on a true 'legend' from Thai folklore or not, it's still a poorly paced and ridiculously cliche ghost flick. The design of Mae Nak might be enough to conjure up a few solid jump scares (thanks to the subtle directing that really tries to make each encounter with the ghost a bit of a surprise, whether it works or not), but in general, the style has just been done to death. No pun intended. A love torn ghost haunting a young couple in love? Meh. Seen it and seen it done better.

Not only is the concept a well trampled topic and style, but the execution of the it's plot is heavily hit or miss. The director shows some inspiration with certain moments, the hand in the crushed car for example, but her relies too heavily on the jump scares and the film's actors (who overact fr too much) to carry the film instead of focusing down on the atmosphere which is what makes these kinds of films work. Even the heightened moments of gore, of which there are a few including a glass plate slicing a man right down the middle in grindhouse cheesy effect, can't make the rather generic film stand out.

Perhaps I'm harsh. I don't care. I felt "The Ghost Of Mae Nak" was a rather boring and uninspired attempt at rehashing what the Japanese had already perfected. It works in moments, but moments rarely carry a film through the entire play time.