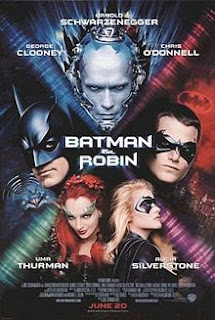 Holy shitty sequel! It's "Batman & Robin"! Joel Schumacher's return as director to the fourth film in the series is quite the...how should I say...cluster fuck? Not that it's 'the worst movie ever made' as some claim, but damn, this film is definitely focused in all the wrong places and lacks most redeeming qualities. It's still fun (and funny as hell in the unintentional sense), but it is a horrid comic book film.

Batman (this time played George "Mr. ER" Clooney) and new partner Robin (O'Donnell) have been kicking ass and taking names. When a new villain, Mr. Freeze (Schwarzenegger) puts his icy grip on Gotham with the help of the flowery Poison Ivy (Thurman) and her muscles Bane (Swenson), Batman and Robin are going to have to fully trust one another to take down the deadly trio. To save Gotham though, they just might have to recruit Alfred's niece (Silverstone) as Batgirl to get it done.

Where to start with "Batman & Robin"? Well, let's look at the film visually. Once again, the focus of this Batman entry is a continuation with the direction they began to use on "Batman Forever". Lots of ridiculous color schemes of the brightest colors known to man, a Gotham design that is oddly built on the biggest statues known to man, and enough camp that Adam West would throw up from silliness. With the outrageous costumes (nipples are back and everything on the suits!) and the wild sets, its hard not to have a little fun with just how far they went on the ginormous sets and outlandish design schemes. It certainly grabs that 60s style comic book Batman by the parts and hangs it out there for everyone to see. Is it completely unneccesary? You know it, but its fun and one has to give it credit there.

That's where the fun ceases though. Unless you are a glutton for the worst script known to man and some of the weirdest consistency on special effects, this is where "Batman & Robin" stops being fun. Honestly, the script is awful. The writers removed any/all depth to any of the characters (including Mr. Freeze who has a great story and great character just watch the animated "Subzero") and turned most of them into caricatures that never represent real people. What happened to Batman's torn psyche? Guess it healed. Freeze's icy demeanor? They made him into a walking pun and made him make his henchmen sing in unison to a cartoon. Poison Ivy's creepy beauty? Now a Bollywood act. It's like they looked at the comics, but never read the comics. This is the biggest middle finger to Batman fans because they took some great villains and great heroes and made them toys.

"Batman & Robin" can be a fun time if you really try not to take it seriously, but for a movie about a comic that was pretty serious (sans certain eras like the 60s which is definitely where this film would fit in) its so disappointing and frustrating that for this reviewer its hard to put it aside. The casting isn't complete shit (although Silverstone's career needed to die and Arnie was not a good choice), but the direction that they didn't take the characters or plot is what screws this film up.