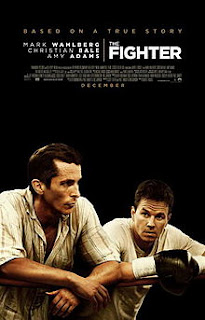 Sports movies aren't necessarily my thing. Outside of the "Rocky" series and anything concerning football, I normally just don't really get into them. "The Fighter" earned so many accolades though that it simply had to be seen to see if the slew of Academy Award nominations was legitimate. They were. "The Fighter" is a film that is gritty and emotional with its execution on screen riveting for the audience. With an amazingly well casted acting ensemble and a director that ably brings the boxing film to modern style, this film is out to impress. Unfortunately, the script is rather predictable and by the numbers and brings the film down from a five rating to a four.

Micky (Wahlberg) and his psuedo-famous ex-boxer brother Dicky (Bale) have been training together all their lives. With their mother (Leo) as Micky's manager, he has been struggling to find himself working up in the boxing world. He fights in fights he shouldn't and his record is questionable at best. When his brother is thrown in prison and gets his brother's hand broken, Micky - with the help of new found support in his girlfriend (Adams) - decides to rift himself from his family and find new management to help get his career on track.

The number one reason to see this film: the acting. Wow. This almost makes one forget that Wahlberg was in "The Happening" (almost). He certainly does a hell of a job as the lead and carries a lot of the emotional vigor that thsi movie requires to work. That's why its almost a shame that he is almost completely overshadowed by his supporting cast. Bale and Leo earned their Academy Awards here and even Adams sports one of her best performances. Partner this with David O. Russell's pseudo-documentary style directing (including fight shots that look realistically like television shots of fights) and this film feels real.

The main problem with "The Fighter" is how it plot progresses. It feels rather cliche. Despite its setting and low life supporting characters, it's a basic 'rise to glory' tale for a boxer looking to make a name for himself. The dialogue is strong and the character work even stronger, but its predictable in the end. If not for the stellar on/off camera work by the cast and director, I would venture to guess "The Fighter" would have been pretty boring.

"The Fighter" certainly earned many of the accolades it won - particularly for Bale and Leo - but its not quite the film to leap up the ranks to be grouped with "Raging Bull" or "Rocky" due to some plot basics. For sports film fans, its a must see and even for the rest of us its at least worth the watch for some great performances.