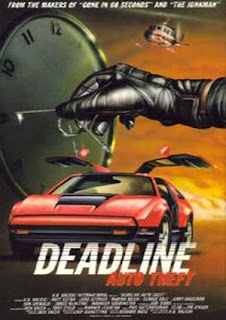 If you've read my reviews for "Puppet Master: The Legacy" and "Silent Night, Deadly Night Part 2" then you are aware that I DESPISE when filmmakers utilize shit tons of stock footage of other films to pad their pieced together monstrosities to feature length. Of all the stock footage filled films I have seen none is more guilty than "Deadline Auto Theft" which is only made up of 10 measly minutes of newly shot footage with the entire rest of the feature being made up of stock footage of 1974 chase classic "Gone in 60 Seconds" and it's 1982 follow-up "The Junkman".

Car enthusiast / daredevil turned filmmakers H.B. Halicki got the notion while filming his second full length feature "The Junkman" that he would go film 10 minutes of new chase footage with his extra time and then splice on the original "Gone in 60 Seconds" to pad it out. I don't mean to speak ill of the dead (Halicki died tragically while filming "Gone in 60 Seconds 2") but this is the biggest display of deception I have EVER seen by a filmmaker, including such stock footage kings as Roger Corman and Ulli Lommel. The worst is that the 70s style of "Gone in 60 Seconds" completely goes against the 80s style of the first 10 minutes. It's like editing apples and carpet together!

The new footage does portray impress car stunt work and chase sequences but for the fact it's ONLY ten minutes long truly pisses me off. I mean what a rip-off! If I wanted to watch "Gone in 60 Seconds" then I would have popped that film in instead! I also laugh that the DVD box artwork proudly proclaims this is "The third in the original 'Gone in 60 Seconds' trilogy". I ask thee WHAT FUCKING TRILOGY? According to Halicki's widow who provides an introduction to the 'film', "The Junkman" is the second in the trilogy and "Deadline Auto Theft" being the third. Trilogy? BULLSHIT. Even more strange is Halicki's unfinished sequel "Gone in 60 Seconds 2" is included in a double feature DVD with "Deadline Auto Theft." Would that have made "Gone in 60 Seconds 2" the fourth in the series? HA!

Halicki was deceptive on how me made "Deadline Auto Theft" and his widow continues to deceive audiences by calling this the third in a non-existent trilogy. They should have included the extra 10 minutes of footage filmed for "Deadline Auto Theft" and the 30 minutes of footage from the unfinished "Gone in 60 Seconds 2" as a bonus on the DVD release of "Gone in 60 Seconds". But why do that when they can screw more money out of fans?

Posted by Cronosmantas at 7:22 PM