Texas Chainsaw Massacre: The Beginning, The - 2/5 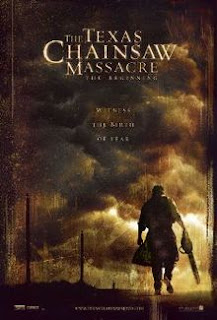 Let's be up front here. "The Texas Chainsaw Massacre" remake was decent enough, but did it really need a prequel? We all know how it's going to work out. The only way that "The Beginning" was going to really work was how clever it would have to be with its details and attention to the small gimmicks. Luckily, it does this to some degree. Unluckily, it doesn't do it enough to raise it above being a cliche horror/slasher film. If you like these modern throwback slasher films, then its worth the watch, but not much more than that. It's basic and never really gets to be as memorable as it could have been.

Years prior to the events of "The Texas Chainsaw Massacre", two couples driving on their way to deliver two young men to a flight to train in the military for Vietnam are stranded in a desolate town after their car wrecks. Newly 'appointed' Sheriff Hoyt (Ermey) finds the couples and decides to take them into his loving household. One of cannabalistic and sadistic tendencies that's fostering the ill intentions of a young and monstrous Thomas Hewitt...who would later be known as Leatherface.

When broken down, "The Beginning" is pretty much damn near the same as its predecessor/sequel. It follows the same patterns, same style protagonists, and director Liebesman tries damn hard to recreate the snazzy directing. For a film filled with brutal violence, tense moments of escape potentials, and horrifying villains - it gets rather boring. We've seen it before and we've seen it better already. Just cause the time period is different and we get to see Leatherface's grotesque birth doesn't make this film really worth all that much. Might as well go back to the remake and re-watch that. It's better all the way around.

Despite Liebesman's valiant efforts to give the film some spark of ingenuity behind the camera with how he plays out some of the sequences, the script for "The Beginning" really doesn't do him any favors. It tries. Oh dear, does it try, but in the end we get a lot of cliche things happening. The protagonists are pathetically ill tempered with their attempts for survival and we just don't quite care enough to really root for them despite some fairly solid performances. The Vietnam detail works to some degree to justify their situations and place it in time, but it never is used to its full potential as a plot motivator.

The only real thing that "The Beginning" has going for it is the little detail work that is fitted into the script that pops up (whether explained or not) in the remake. How Uncle Monty loses his legs or how the father loses his teeth. These little things make it worth while for the true franchise fan, but its not enough to justify the entire film. Some of these moments are even a bit predictable like how Leatherface comes about his chainsaw (with cheesy music and all). It might make it worth the watch for those of you out there that really enjoyed the remake, but for the rest of you, this is a skip.

"The Beginning" has its moments. Despite its abrupt ending, there is a sweet shot of Leatherface walking down the road and some of the detailing that links the two films is fun to see, but overall this film is a needless addition that just reworks the same formula while adding very little to the overarching concept. It's a basic slasher. That's pretty much the bottom line. Only for franchise fans mostly.

Written By Matt Reifschneider
Posted by DarkReif at 11:13 PM