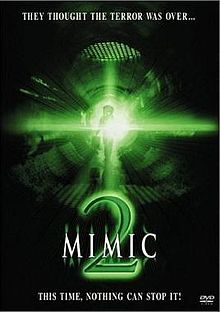 A direct to DVD sequel to a film that shouldn't have been near as good as it was sounds like an atrocious time for a science fiction horror franchise. That's the reason I had to see it. "Mimic 2" (sometimes subtitled with the irrelevant "Hardshell"), may not come close to reaching the balance and heights of its originator, but it certainly has its straight to DVD fun plot and ridiculous executions. It's not as bad as I expected, but it certainly didn't impress me much either.

Remi (Koromzay, reprising the bit part from the first "Mimic") is a bug scientist and teacher for an inner city school. When a series of deaths, all of whom had their faces ripped off, leads a detective to her, she comes under investigation that doubles as a reminder of her failed romantic life. Her discovery that her 'stalker' is an escaped and mutated Judas breed mimic gets her trapped in a blocked off high school makes her real nervous...and leads the military right after her and the big bug.

"Mimic 2" can be quite fun. It's over the top, the plot is rushed to get us to the scary/horror sequences where the mimic kills people, and its low budget lends itself to some clever ways to get around its constraints. First time director Jean de Segonzac does his best to recreate Del Toro's facinating style of the original - although amatuer mistakes certainly abound here - and the film does what it can with what it has. For that, I respect "Mimic 2".

This film is plagued with half cooked ideas though. It's major issues all stem from a plot that is ill explained and only half way executed. Things aren't explained and the audience is left wondering...what the hell just happened and why...far too many times to be a cohesive picture. Some of these highlights include major plot points like: why is the mimic stalking Remi? Why does it take people's faces to craft its own image? What's with the suitcase with the tiny Judas bugs that only appears a few times and is dropped from the plot like a hot potato? By the end of the film, I ceased to actually care about the plot and was just running with "Mimic 2" for the fun ride.

Nothing about this sequel is really all that great. Sans its plot hole ridden story, the film certainly works on that mediocre vibe. The acting, directing, and special effects are decent, but nothing to get overly excited for. This is a sequel that earns its merits by being a sequel to a massively underrated film and rides the wakes from the original's big splash. Mostly for fans or those willing to waste a couple hours on a mediocre film.

BONUS RANT: I want you to read the tagline on the cover art posted. This is one of the worst and most generic tags I've yet to see on a film. It's not clever. It's long. It's just a horrible tag line.

Written By Matt Reifschneider
Posted by DarkReif at 10:28 AM