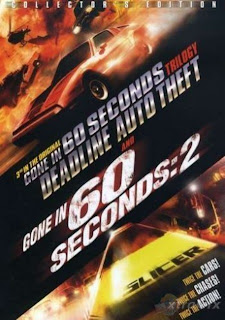 How the hell do I rate an incomplete film? The ill-fated "Gone in 60 Seconds 2" is a real conundrum in my reviewing method. I can't really rate it based on normal reviewing criteria as it is unfinished due to tragic circumstances. Well examining the 30 minutes of footage that was shot, it's easy to say that H. B. Halicki's long awaited sequel to his 1974 cult hit would have not outdone the original by a long shot so I will award it the same ill-fated star rating as the original.

The sad story behind why "Gone in 60 Seconds 2" was never completed is for the fact that director / writer / star H. B. Halicki tragically died an untimely death while filming, and surprisingly it wasn't while behind the steering wheel. During one of its impressive stunt sequences where a water tower crumbles to the ground, an anchoring wire snapped and cut through a telephone pole which fell on top of him, killing him instantly. Hence the film was never completed but for fans 30 minutes of action sequences were and this footage was finally unearthed on DVD in a double feature with "Deadline Auto Theft."

Those who have seen Halicki's previous films it comes to no surprise that Halicki filmed all the action sequences first before stumbling through 'plot' and 'dialogue' scenes. So basically the 30 minutes of film that was shot is the last act of the film... which means car wreck galore.

The footage starts with Halicki playing... what else... a car thief that hijacks a two trailered semi. He then decides to give the cops the chase of their life as he takes the semi on a wrecking path, destroying an insane number of cars in the process. Think of the opening to "Beverly Hills Cop" on steroids. After near capture he escapes and steals a prototype car known as the 'slicer', a pyramidal shaped automobile that easily slides under numerous cars, flipping them.

The editing is surprisingly fluent considering not all the footage was completed and the editors for the DVD release did a decent job trying to tie the sequences together. The production values are of course low, with it resembling a TV-made production in look.

Though I am not a huge fan of the first film, it is sad that "Gone in 60 Seconds 2" was never completed but then again dialogue and plot was never the main attraction of Halicki films of the past. Fans wanted to get to the twisted metal carnage as fast as possible. Well here you don't have to suffer though a insomnia inducing plot to get to the action... you're already there! Considering how much the DVD distributors tinkered with the DVD releases of Halicki's previous films it's a wonder they didn't try to finish the film... or worse edit scenes of the original "Gone in 60 Seconds" to pad it to full length, like that dreaded "Deadline Auto Theft."

Written By Eric Reifschneider
Posted by Cronosmantas at 10:01 PM