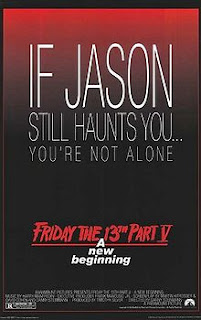 If "Friday The 13th: The Final Chapter" was beggining to get redundant with little in the ways of redemption, then the unnecessary "A New Beginning" (also referred to as Part V although the film itself doesn't actually call it that) is repetitively redundant with even less in the in the ways of redemption. This new kick start to the series is lack luster from the get go and never really gets moving. Oh there is plenty of kills and random nudity to suffice its slasher brethren, but not much else to really claim its place among the franchise.

Tommy Jarvis (Shepherd and a brief cameo in the opening by Feldman reprising the role from "The Final Chapter") has been a little fucked up since he killed Jason at the age of 12. Now much older, he is in a halfway house for troubled teens when visions of Jason begin to haunt him. Soon the bodies begin to pile up and people are expecting Jason to show up - but is it truly Jason or is something more sinister afoot?

The fourth entry was saved by some clever directing and some pretty brutal special effects to counteract its underdeveloped (but potentially awesome) plot. The fifth entry has the same issue, not utilizing its smarter plot elements, but cannot be saved by its by the numbers slasher death sequences of which there are many or the even less enthusiastic directing. Even though this is known as a 'black sheep' amongst the series as its the first to not have Jason as the main villain, it's also by far the least memorable when it comes down to it.

The Tommy Jarvis story is still underdeveloped. This is the main issue with "A New Beginning". I just didn't care. Not that I cared in the previous entry, but I still don't care and probably care even less about Tommy Jarvis and his fucked up life. If that was supposed to be the heart of this picture, then I hope that the kills are decent enough to suffice my time.

Turns out, the kills are about has basic as possible. The brutality onscreen is left out for the most part and the 'clever' kills just don't spark the same fire they did prior (no pun intended for killing a guy with a road flare). We are never really privy to the 'mystery' of who is the new Jason (jump in the Mystery Van folks cause we'll get the full explanation at the end even if the clues don't add up!) and his rather extensive killing spree of motivationless kills gets to be boring by the end. He fucking kills every one. Why kill the kids on the road? Why the hell not?! Why kill the couple in the trailer park?! Cause they were onscreen as a supporting cast...that's why! It just gets ridiculous and never the good over-the-top ridiculous like it should have.

BONUS RANT: This one couldn't even come up with an original title sequence. They just slightly rearranged the exploding title from the fourth one using a flying hockey mask at the screen. It was funny-dumb before, now its just dumb.

Written By Matt Reifschneider
Posted by DarkReif at 3:30 PM