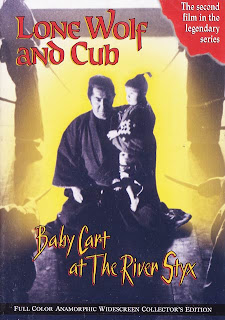 This first sequel to the bloody successful (pun intended) rebel samurai film Lone Wolf and Cub: Sword of Vengeance is top notch, even bloodier and a cut above the original. Considering how good the original is, that's quite a feat, especially since this was pumped out the very same year!

Lone Wolf is hired by opprobrious Yagyu clan in order to assassinate a spy who has stolen some secrets about their plantation that harvests a precious dye. Lone Wolf's job is simple... kill him before he gets back to the Shogun. It's not going to be easy though as there are assassins all around him with a hit on his head as well as his son. The result is one of the bloodiest, most action packed samurai films ever made.

What makes this sequel just a tad better than the first film (not enough to warrant a star rating difference) is that it is a hair more ambitious in its approach. The first film of course focused on establishing our anti-hero samurai where this sequel hits the ground running, expanding on themes and concepts that the original was only able to hint at.

Director Kenji Misumi also makes this sequel a tad more likeable as he injects a sly sense of underlying humor and even a few heartfelt moments (the scene where our young boy brings his injured father some water from the river in his mouth being a sequence that succeeds on both accounts). The film is also a little more over-the-top in its approach to the violence, my personal favorite being a shot where director Misumi shows Lone Wolf's face through a split, blood spurting head of a man. HARDCORE!

These over-the-top action sequences are extremely graphic, even slightly poetic in their approach. There are villains to get cut apart around every turn! Lone Wolf is attacked by a woman ninja clan, a male ninja clan, some spies and finally three assassins that no doubt inspired the look of the 'three storms' in one of my all time favorite films Big Trouble in Little China with their large straw hats and various weapon usages.

The baby cart Lone Wolf pushes his baby around in even plays a bigger part in this story as it is a mobil gadget, with swords and other stabbing weapons hidden through-out to ensure heads are going to role.

To top it off there is even entrancing subplot which revolves around a female assassin (with a moving performance by Kayo Matsuo) that becomes emotionally compromised by Lone Wolf and his son when they decide to save her life.

I liked this sequel even more than the original and I would even go as far to say it's my favorite of the six part series. It's just more ambitious, violent and over-the-top with a nice underlying sense of humor that doesn't compromise the dramatic story. Lone Wolf and Cub: Baby Cart at the River Styx would be edited together successfully with the first film and re-titled Shogun Assassin for the American film market. Followed by Lone Wolf and Cub: Baby Cart to Hades.

Written By Eric Reifschneider
Posted by Cronosmantas at 4:15 PM