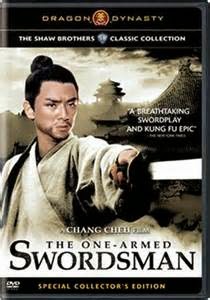 The Shaw Brothers may have pumped out a slew of both low and big budget martial arts films in their time, but throughout the massive flood of kung fu and wuxia there are quite a few pictures that deserve the attention of film enthusiasts. Including the epic The One-Armed Swordsman, whose rather odd premise builds quite the dramatic character study for a film of this nature. Certainly one of the better films the Shaw Brothers put out, The One-Armed Swordsman rises above its cliche moments to give us one of the best martial arts films crafted at the time.

Fang Kang (Wang) watched his father die as he saved his master, a renowned swordsman Qi Rufeng, and left him with only his broken sword. Qi Rufeng swore to up-bring the young man in his house, teaching him to be a swordsman expert in the style of Golden Sword. When Fang Kang decides to leave many years later, a tragic accident leaves him with only one arm and lost in the wilderness. A young woman Xiaoman heals him and he vows to stay with her to live life as a farmer. When an evil brother team appears to exterminate Qi Rufeng and his disciples, only Fang Kang and his one armed swordsmanship can save them.

For a classic wuxia film, I love the fact that The One-Armed Swordsman is actually character focused instead of fully overblown in story. . Not that 'these characters are crazy' focus that many Shaw films can cater to, but legit character development and a personal struggle kind of focus. It's what makes this film work so damn well. Really, it's basic plot is the same old same old Shaw Brothers kind of story. Clans of martial artists at odds with one another and lots of fighting ensues. Yet the focus is on our hero Fang Kang and his growth as a person due to his disability. Rather than his disability seeming like a gimmick (it can seem that way with the martial arts book that only has the left side that he is given), it seems like a truthful struggle that creates this man who just wants to live a normal life and ends up becoming an anti-hero with his alliances. Add in a bonus romantic sub plot and it just works way better than it should have.

I was also surprised by the lack of significant fight sequences. Until the final throw down between the two martial arts masters and their disciples, the fights are brief and are used to further the plot rather than the generic 'random fight sequence' that happen way too often in a wuxia. Not to mention a good portion of the film focuses on sword fighting which is always fun to watch. Particularly when Fang Kang faces the Law brothers in the tea shanty. Great entertainment. When the fighting is used, its well done and relevant, just how it should be.

The One-Armed Swordsman may seem like a gimmick riddled wuxia romp on paper, but the film rises above it and unravels a great character whose mythos would be greater than the film itself. It's focus on a classic and semi-epic plot generates a film that is more than just a swordplay flick, but a legitimately built classic with a great anti-hero character.