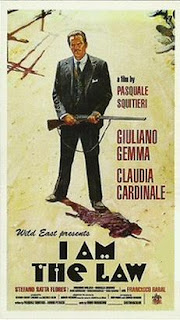 In the realm of Italian Poliziotteschi crime thrillers, there is a broad spectrum that the films cover. On one side there is the violent "Dirty Harry" and "French Connection" clones that follow a hard edged cop as they take down syndicates. These entries are high on action, lower on plot. On the other end there are politically charged thrillers that are low on action, and high on plot with judges or higher class officials taking on the mafia. "I Am the Law" easily falls in the latter end of the spectrum as it is extremely low on action, but full of politically charged intensity.

Unlike most politically charged Poliziotteschi films at the time which took place at the time they were made, "I Am the Law" actually takes place in a pre-World War II Sicily. What we have is a high class, determined Judge (Giuliano Gemma) arriving in Sicily to do away with the Mafia once and for all. It of course is not an easy job as the Mafia has their greedy little fingers in every aspect of the lives of Sicily's citizens. Gemma finds that he's on his own as the Mafia's influence infects all they up to the highest order in Italy.

The setting of this film is the biggest draw to this period piece as it is so rare for films in this genre to take place in a historical setting. The filmmakers realistically capture the backdrop of pre-World War Sicily with its amazing on site locations. These amazing historic locations mixed with convincing costume design ensures your going take a trip back in time.

The biggest surprise from "I Am the Law" is the solid performance from Giuliano Gemma. If you go into "I Am the Law" expecting the same cocky cowboys he portrayed in his Spaghetti Westerns with the boyish charm then you are going to be sorely disappointed. There is no silly charm to this character as he is all business. It's unique, almost bizarre to see Gemma play such a serious, stoic character with anger boiling in his veins. This however makes the performance that much better. Hell to be honest this might very well be the best performance as his career.

Director Pasquale Squitieri, a rather unknown director in Italy, handles the film with a sure hand and gives the film a stark, dark look, matching the films dark nature of its plot. His approach to the subject matter is comparable to the works of Damiano Damiani, only more dark and bleak. Ennio Moriconne's fabulous score on serves aid in the films dark atmosphere.

"I Am the Law" was quite a surprise for me. Though I still prefer my Poliziotteschi films to be more action orientated and over-the-top there's no denying that "I Am the Law" is a terrific film made unique by it's period setting , strong performances and visualistic direction. This obscure rarity was given a fantastic DVD release by Wild East Productions in a double feature with another politically charged crime film simply titled "Mafia".

Written By Eric Reifschneider
Posted by Cronosmantas at 11:33 AM