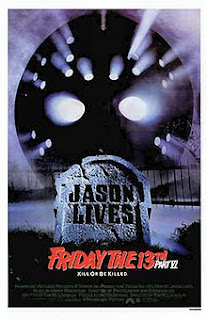 This is the film that this franchise needed. Although many might considering this a departure from the first era's formula a negative thing, the change of pace only revitalized the series and gave it renewed energy. For a series already getting redundant in its style, "Friday The 13th Part VI: Jason Lives" is a fresh (or decayed) take on Jason and his ongoing slaughterfest that knows perfectly when to poke fun at itself while adding in enough new elements to make it the most exciting and entertaining of the series since the first entry.

Tommy Jarvis (Mathews) is done with Jason and his curse. After traumatizing him as a child and being haunted by the killer his whole life, he is ready to put it to an end. So he digs up Jason's corpse and while trying to burn it, Jason is struck by lighting and brought back to life to wreck havoc as a supernatural force of evil. With an unbeliving sheriff trying to get rid of Tommy and a group of new counselors and children at Camp Crystal Lake, it looks like Jason's comeback is going to be big.

The beauty of "Part VI" for this franchise is that it retains the basics that made the first portion of the series great slashers (lots of unique kills, an unstoppable villain, clueless victims) and builds on it with ridiculous vigor - upping each element to its maximum outrageousness. Normally, this sounds like a last ditch effort to revitalize the series, but in the case "Jason Lives" it works to beautiful effect. The added dark humor is a bonus too.

This entry also benefits from basically ignoring the fifth film. Not that the fifth one was all that bad, but taking the 'supernatural' Jason route and continuing to push Tommy Jarvis as the 'hero' works. Basically, there is less plot to get through before the slaughter begins. We do get new added characters for protagonists (namely the sheriff and his daughter) who ably add a missing element from the previous few entries as we actually care about their survival - even if their plans to stop Jason (a chain and rock?) seem asinine. This good vs evil aspect is heightened for the film and it works.

It also helps that director Tom McLoughlin seems to know exactly how to make the over the top story and elements work in all the right ways. He grabs onto it and just fucking runs it to the ground. Jason is supernatural now? Let's have him push a ladies face through the side of a camper trailer, flip the trailer, and pop out the side as its erupting in flames! Sheriff wants Tommy out of town? Let's have an epic car chase to an Alice Cooper song as one car goes in reverse! Want more kills of random people? Let's have Jason decapitate three random paintballers with one slice! It's as if McLoughlin was having way too much fun with this film. It shows with its odd and dark humor (they break the fourth wall in it to criticize the audience for watching such garbage as entertainment) and ability to make it work. This added side to this film makes it a head above the rest of the series.

"Part VI" is a romp of a film. It's everything we've all come to love from the franchise partnered with a new found dark humor and over the top punch that makes it the best of the series since the original. It's not for everyone, particularly those who didn't think the franchise should have changed, but its 100 mph approach to the concept sells it better then it should have ever worked. A definite favorite here at Blood Brothers!

BONUS PRAISE: Having the James Bond inspired intro where Jason slashes the screen is the most brilliantly idiotic intro ever. It establishes the general tone for the film and seems to make a mockery out of the previous two films' over the top title sequences. Seriously classic!

Written By Matt Reifschneider
Posted by DarkReif at 9:51 AM