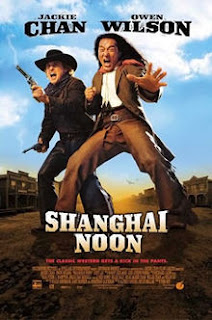 Jackie Chan's emergence into American mainstream film might have been somewhat of a surprise for most, but its films like his Kung Fu Western "Shanghai Noon" that fully displays why he was successful at the crossover. This little action/comedy (which is what Chan does best) combines all the elements that set this stunt master aside from his peers. Although its far from being perfect or even one of Chan's best, "Shanghai Noon" embraces the fun aspects of film watching and runs with them.

Chon Wang (Chan) finds himself in an odd situation. Part of the Imperial Guard in China, he allows Princess Pei Pei (Lui) to flee to the American west (convinced to do so as part of a kidnapping) and he feels it is honorable to make his way there to help bring her back by paying a ransom. In the west, he is quickly separated from his fellow guards when a train heist goes wrong at the hands of notoriously bad outlaw Roy O'Bannon (Wilson). Both of them left out of their element, they must team together and figure out how the west was won as they uncover larger issues upon their way to rescue the Princess.

"Shanghai Noon" is funny. It's quirky. It's heart warming. It's got great action sequences. Really, its what makes a Jackie Chan film good. The concept lends itself to some great situations as it plays upon western film cliches (we get train heists, bar brawls, brothels, hangings, duels, Native Americans, and a church shoot out for its finale) and the film makers, along with Chan, use the settings and situations to all the right ways. Chan is able to make some memorable choreography by utilizing specific sets and items. Pine trees, antlers, horses, and of course, the train are all made use of during the fights which even furthers how cool the kung fu and westerns mix in this film.

"Shanghai Noon" also comes off as remarkably funny. The writing isn't always in top form as Owen Wilson tends to ramble far too much, he only gets in some solid one liners occasionally, and the plot seems to meander a bit to fit in all the Western motifs (why do they have Chan climb through the mountains again?). The 'buddy cop' formula of Chan and Wilson works quite well (just as solid as the Tucker/Chan duo two years prior) and the chemistry between the two carries the film out in its more heartfelt aspects. Not to mention all of the references to westerns that make it worth the watch for Western fans. "Shanghai Noon" can be very funny at times.

Although not near Chan's best work, "Shanghai Noon" comes across as a well put together and executed kung fu/western. It's far from perfect (mostly due to writing issues and some pacing problems) but the sheer fun that one has watching Chan/Wilson bicker and worm their way out of cliche western situations is worth the time spent.