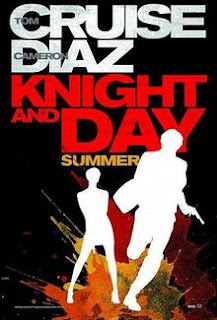 I love when a movie tries so hard to mix genres that it ends up confusing me by the end of it. What the hell did I just watch? That's the exact question I was left pondering as the credits for "Knight And Day" rolled. Was it meant to be a comedy? To be taken seriously as a spy film? Were those CGI bulls supposed to look real? What the hell did I just watch? If these are the questions left by a film, it's unusually a bad sign. Which is ironic considering that "Knight And Day" is not all that bad. The movie was fun, but it was just successful at being mediocre.

June (Diaz) wasn't trying to be anything she wasn't. She just happened to get on the wrong plane at the wrong time. Now she is stuck with Roy (Cruise), a semi-spazz secret agent on the run from his own agency. Turns out he is being blamed for the theft of a very special item (cough battery cough) and has to keep himself and June alive long enough to clear his name and hers. Their trek for redemption will take them across the globe as they put the pieces together...and maybe find something in each other they had been looking for.

"Knight And Day" might be the most mediocre fun you've had at a romantic comedy/spy/thriller/action film in the last few years. It is fun at times. The first act of the film as Diaz and Cruise meet up is actually quite hilarious. Cruise's almost tongue in cheek "trying not to be the bad guy" spoof on his Ethan character from the "Mission: Impossible" series starts off as a riot. The chemistry sparks between the two and his calm explanations of what is going to happen to Diaz are well written and funny. Unfortunately, this doesn't carry through the film and it quickly tanks about a third of the way through.

This is when the film tries to throw in some serious drama and romantic squabbles into the script. It tries too hard to be a legit spy film with these over the top action sequences. It's as if they forgot to be funny about half way through. It's frustrating is what it is. The character Roy suddenly loses his edgy and borderline insane rambles and becomes this serious and thoughtful spy. Diaz becomes this depressing person. The film loses all of its energy and chemistry and tries to fill it in with action and leaping sporadically from fancy location to fancy location. It just doesn't work like it could have and it gets rather boring.

Some of the action sequences are solid, but if they were going to go over the top they should have really embraced it. Instead it just seemingly works as filler towards the end. Some of the humor works, particularly when it has this mysterious frenzy to it, but it loses the energy half way through and gets too serious. "Knight And Day" tries desperately to blend genres into a fun romp but it just comes off as muddled and ill focused making it a mediocre film. The potential was there but it was rarely met.

Written By Matt Reifschneider
Posted by DarkReif at 12:01 PM