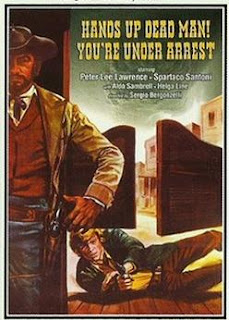 You know you're rummaging through the most obscure films the genre has to offer when you pick up films with awkward titles like "Hands Up Dead Man! You're Under Arrest". It's easy to see this wasn't the original title as the English version I have has an equally awkward title sequence spliced in with background images and music that clashes with the title and opening pre-title sequence.

The film opens atmospherically showing the aftermath of a massacre during the Civil War. A young doctor (Peter Lee Lawrence) is tending to the wounds of the dying soldiers when a sadistic enemy commander enters the hospital, brutally killing all the wounded as he doesn't want to take prisoners. He challenges our doctor, who proves he couldn't take him on, before getting shot in the hand and escaping. Years later our doctor has become a Texas Ranger who roams into a small town undercover as a perfume salesman in order to get vengeance on the sadistic commander. Our commander is now a successful land baron killing local land owners in order to gain property for an upcoming railroad.

The DVD box claims the film to be a "gothic" western but I wouldn't use such a term to praise this rather average Spaghetti Western. Sure the opening is atmospheric and eye catching but overall the film lacks style and looks overall cheap. Director León Klimovsky also injects some awkward humor sequences, one being our hero yelling timber after knocking a guy out. We also get a priest who laughs with glee as our hero guns down men. Does this sound like an element of a "gothic" western? Hardly!

I also wasn't keen on young star Peter Lee Lawrence. He made his first Spaghetti Western appearance "For Few Dollars More" and filmmakers later utilized his good looks in nearly 20 more westerns to come. He just comes off as an cocky pretty boy that has no business being in a genre known for more extreme violence. If I were a young Italian girl I might of liked him but as is he just doesn't fit in with the genre. Maybe if I see more films with him he'll grow on me but he hardly won me over with this outing.

"Hands Up Dead Man! You're Under Arrest" (also known as "Raise Your Hands, Dead Man, You're Under Arrest") is an obscure spaghetti western from the vaults and is ONLY for the most hardcore fans of the genre. It lacks style, looks cheap and the main star hardly seemed like he could carry a western. A decent villain and an atmospheric opening are really the only things I can praise this Spaghetti Western for. There are a lot BETTER films the genre has to offer before anyone delves into this obscure entry.