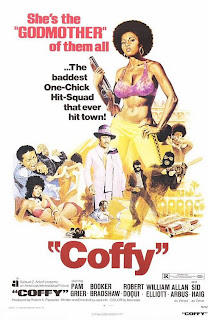 How do you like your coffee? If you prefer it tan and sweet then you're going into the wrong movie as you're going to get a mouthful of hot black and bitter fluid with "Coffy", one of the quaint essential blaxploitation films of the early 70s that catapulted Pam Grier into super-stardom.

Coffy is mad, as in royally pissed off at all the druglords in the L.A. area. You see drugs killed her brother and put her sister in the hospital so she puts her high profile career as an assistant surgeon at risk to beat the streets at night, waging her wonderful ass in front of high profile drug lords only to blow their asses away. She even pulls a "Yojimbo" by pitting powerful druglords against one another before getting her ultimate revenge on her boyfriend that happens to be a corrupt political figure up for senator.

Pam Grier, shall I say, wasn't hired for her wonderful acting ability. In some scenes she is downright awful and it's obvious she was hired for other "assets". Her poor acting on the bright side actually adds to the likability of the film and it's easily to see why she became such a cult icon of the blaxploitation genre. Sexy and absolutely deadly as she won't hesitate to drop her pants and not long after splatter your brains against the wall.

Director Jack Hill was new to the Blaxploitation genre and being white didn't know if he could make a good one as he wasn't familiar with the culture. Boy oh boy did he prove everyone wrong as he nailed it! Not only does he provide a likable black female lead but he knows what it takes to make an exploitative revenge film work as he loads the film with extreme violence and nudity (of both the white and black race). The violence is what shocked me the most as the film opens with Coffy blowin' a guy's head off. Holy shit! She even drives a car through the front of a house to mow some guys down. Go, Coffy, go! Get those druglord bastards!

This is low budget, exploitative blaxploitation at it's best and most shameless. Sure the acting is bad and some of the dialogue is downright laughable but it has all the essential ingredients for an enjoyable blaxploitation picture. If you're looking for Shaft-like classiness then look somewhere else my friends as Coffy is no-holds bared extreme Blaxploitation entertainment.

Bonus Praise: Is that a young, thin Sid Haig I see? Why shit on a gooses ass it is! Most people know him from Rob Zombie's more recent horror films like "House of 1000 Corpses" and "The Devil's Rejects" but don't know him from his classic era films from the 70s and 80s like "Coffy" and "Galaxy of Terror". Seeing Sid Haig in these old cult films always brings a smile to my face.