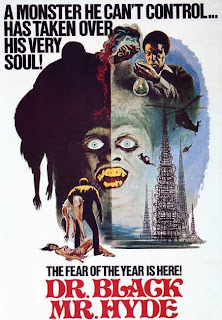 Director William Crain made a memorable stamp into the blaxploitation genre with his horror hybrid and humorously titled "Blacula" which was unleashed into theaters in 1972. For reasons unknown he passed on directing the sequel "Scream, Blacula, Scream" but must have felt he hadn't insulted enough classic movie monsters so four years later he returned to blaxploitate another classic movie monster with "Dr. Black, Mr. Hyde." This resulted in one of the most humorous trailers I have ever witnessed which I highly recommend everyone to see it by clicking here. Does the film live up to its trailer? Well let's consume some alcohol to prepare for this bad boy and see.

Dr. Henry Pride is a successful doctor experimenting with an serum that is supposed to heal damaged liver cells. You see he used to live with his mother in a bordello and she died of liver problems caused by drinking heavily. While volunteering his free time at the clinic in a dilapidated portion of L.A., Henry Pride decides to test the serum on himself which transforms him into a hulking white skinned monster that ravages L.A. killing hookers and pimps with his karate chops. Will a hooker that has love for him be able to stop his rampage?

Unlike the trailer suggests (with such aw-inspiring lines as "Don't give him no sass or he'll kick your ass") this film is actually played rather seriously adding to the unintentional hilarity. It's hard to believe star Bernie Casey didn't burst out into laughter with such a silly concept. Perhaps the silliest aspect is actually the raciest approach to how he turns "white" when he becomes a monster (in an interesting bit of trivia the beast was created by future make up master Stan Winston). Subtle, Crain... real subtle.

The film has the typical drive in look of the time... as in really cheap. Don't look for dynamic camera angles from director Crain or marvelous cinematography as none of that is present. Then again we are watching a blaxploitation take on "Dr. Jekyll and Mr. Hyde" so you can't expect much from a good filmmaking standpoint.

Yes there was unintentional hilarity but sadly, yet expectably, "Dr. Black Mr. Hyde" didn't live up to the amazing entertainment value the trailer promised. It's not even as good as Crain's "Blacula" but fans of these silly horror hybrid blaxploitation films will definitely want to hunt this down.

Written By Eric Reifschneider
Posted by Cronosmantas at 6:45 PM