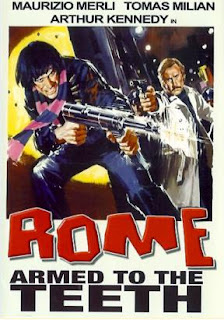 By 1976 Maurizio Merli had played enough inspector roles in Poliziotteschi films to have his stock character down pat. In comes director Umberto Lenzi who proved he had what it took to make gritty, nasty crime films with his 1974 picture "Almost Human". Lenzi teams up with Merli to give audiences something a little different to the stock Merli film by adding loads of ultra violence, sleaze and political incorrectness. Not saying Merli films before didn't have these ingredients, just not to the extent Lenzi provides. He loads up on it so much that he almost seems to be taking some pokes at the genre while at the same time making one of the most memorable and entertaining examples the genre has to offer.

Merli plays Inspector Tanzi, a tough as nails cop that hates criminals as much as he hates crime. So what makes this character different than his Inspector Betti character that he portrayed previously in "Violent Rome" and "A Special Cop in Action"? NOTHING. It's the exact same character just with a different name and if you like this particular character (and I do) then you're in for at treat. Tanzi uses any means necessary to get information from thugs, even by beating it out of them (usually by the trademark Merli bitch slap method). Tanzi's boss isn't keen on his violent methods and is constantly hounding him while he is on the trail of a psychotic thug known as "Il Gobbo", a hunchback played by Tomas Milian. Can Tanzi stop the flow of crime before he and his girl bite the dust?

Merli is perfect as usual in his typical tough as nails cop role. I really dig how his characters have no scruples and are even more mean and nasty than his American counter-part Dirty Harry. Milian, one of my favorite Italian actors, however doesn't get enough credit for his role as the slimeball hunchback. He proved he had what it took to play these despicable characters in "Almost Human" and he proves it here again by re-teaming with director Umberto Lenzi. The rest of the cast is made of up strong stock Italian actors most notably Ivan Rassimov as a steal faced sleazball drug dealer.

Umberto Lenzi amps up the violence and sleaze compared to earlier genre outings by other directors and in doing so makes this far more memorable. I had a wonderful time with his more over-the-top approach to the genre. Lenzi will always be more remembered for his unforgettable gore flicks like "Cannibal Ferox" and "Nightmare City" but his true achievements were in the poliziotteschi genre and "Rome Armed to the Teeth" being a prime example.

"Rome Armed to the Teeth" has everything an Italian cult fanatic wants: Great cast, great score, fast paced action and hyped up uber violence and sleaze provided by director Umberto Lenzi. It may not be as serious or classy as the works of Fernando Di Leo but it's perhaps more entertaining and more memorable thanks to Lenzi's adrenaline, amped up approach. Lenzi, Merli and Milian would also team up for a sequel entitled "The Cynic, the Rat and the Fist."

"Rome Armed to the Teeth" is a bitch to come by on DVD. Grindhouse Releasing is slated to release this film sometime in the future under the title "The Tough Ones" but considering the company puts out what seems like 1 DVD every 10 years I figured I would be dead before they did. I instead obtained a DVD release from a grey market company entitled Alfa Digital and put a lot of blood, sweat and tears into hunting it down. It was well worth the hunt. The release isn't as strong as legit companies like Blue-Underground and NoShame but for what it is I was astonished by the quality. 16X9 widescreen, silver pressed manufactured disc and all. Friendly people at a company called "Plausible Denial Productions" were nice enough to go out of their way to special order the DVD for me. If you would like to purchase this disc then visit their website by clicking here or shoot them an email: customerservice@plausible-denial.com