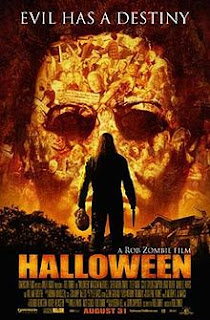 It dawned on me the other day that even though I have a review up for the abysmal "Halloween II", this site was lacking a review for Rob Zombie's "Halloween". Thusly, I tucked up my balls, cracked my fingers, and busted out my director's cut Blu Ray that I bought from Wal-Mart for cheap dirt. In all honesty, I hadn't seen this version of the film yet (I hadn't seen this movie since opening weekend of its theatrical release) and thought it was time to revisit a much loved/hated picture and dig up those repressed memories of it. This is what I gathered.

Micheal Myers' family life is not good. Nor is it well written. He has a mother (Sheri Moon Zombie) who desperately tries to do her best, but constantly makes poor choices. Michael tries to be like the other kids, but his lacking conscience and love for pain makes it a bit tough. On a Halloween night, he loses himself and slaughters his family except for his baby sister when his mother is at work. For the next decade, Michael is incarcerated and studied by Loomis (McDowell), until one night an opportunity unleashes this evil man into the world again. Now he's headed back home to find his sister. It's going to be a hellish Halloween.

To this day, I'm torn on "Halloween". Rob Zombie has a very unique and distinct visual style that really works in this modernized take of the John Carpenter classic and it allows for some very cool looking shots and ideas to develop in this film. He does jump scares quite well and utilizes the silent tension of the second half to balance his bursts of extreme violence nicely. Zombie knows how the film should work on a visual level and for that this film earns its 2 out of 5.

Besides that though, "Halloween" derails in a sort of plot hole ridden train wreck of writing. As I have always claimed with Rob Zombie, his writing is obviously his weakest point and this film suffers handedly from it. The first half (which is Zombie's original 'prequel' aspect to this remake that explains and displays Myers as a child and what happens) has atrocious dialogue that beats the viewer with obscenities and random violence. Again, visually its quite exhilarating, but dropping f-bombs and brushing over years and years of story in an hour doesn't do it any favors.  This only leaves an entire film (the original "Halloween" story) for the film to brush over in an hour and again, it doesn't do it any favors. It's like watching a horror movie on fast forward for two hours where seemingly important scenes are missing or quickly blasted through with some horrible dialogue.

I appreciate that Zombie wanted to develop his own aspect of the movie (its origins), but it also deviates from what made the original "Halloween" such a scary movie. That being motivation. What made Carpenter's film work was our protagonists battling against something without reason or clear vision. It's people versus evil in man form. Zombie's version, humanizes the villain with its origins and leaves almost rooting for Michael to pull out of his darkness. Not rooting for Laurie or Loomis. This is an idea that looks good on paper, but didn't transfer well to film. It just leaves to many plot holes like the biggest one of the film - what does Michael plan to do with Laurie and how does he know its her?

"Halloween" is far from being a crap shoot, but that's only because Zombie has some sweet visual style that really works here. Besides that though, the film has an over rushed plot ridden with holes, awful dialogue, and hit or miss acting making it one of my most disappointing remakes out there.

Written By Matt Reifschneider
Posted by DarkReif at 12:05 PM