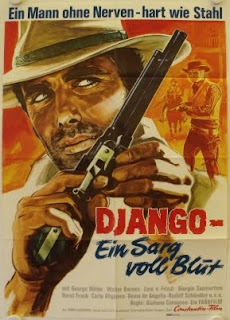 I don't know why it took me so long to finally get around to seeing George Hilton Spaghetti Westerns. I always liked the guy in Gialli and Poliziotteschi outings but for some reason his Spaghetti Westerns always remained out of my reach for viewing. Now after finally seeing a few I can honestly say he's becoming one of my all time favorite stars with "The Moment to Kill" being my personal favorite as it is a fine example of the genre.

Hilton is a bounty hunter traveling the country side with his trusty thick companion Bull when they come across a small town where the Justice of the Peace is on the hunt for a hidden treasure of Confederate gold. A Confederate general hid the gold in his dilapidated mansion in hopes it would be used to fund another onslaught against the north now Hilton must solve a riddle with the help of the General's wheelchair bound daughter to locate the secret hiding place. Double crosses and plot twists are abound as everyone seems to be out for the gold themselves.

Hilton is in top form here playing a little more serious version of his usual quirky cowboy characters. Director Giulano Carmineo (under the Americanized pseudonym Antohy Ascott) also brings all the typical elements of the genre and blends them together in an entertaining mixture of stylish shootouts, sundried landscapes, creaky southern manors, a hidden cache of gold and smokin' hot babes in wheel chairs. He is even able to craft some well placed humor into the mix adding to the overall enjoyment.

"The Moment to Kill" (released in some countries as an unofficial "Django" sequel) is an extremely entertaining example of the genre and thanks to Wild East's George Hilton Double Feature with "Full House for the Devil" it is no longer hard to come by. With its fast pace, well placed humor, nasty villains and wonderful whistle along score this will be a must see for fans of the genre. Not the best the genre has to offer but a gratifying one that any spaghetti nut will dig and my personal favorite of George Hilton so far.

Bonus Praise: I love the scene where Hilton throws his spur into a guys neck. How often do you see that in a western? NEVER and only a Spaghetti Western would have the balls to play off such a ridiculous idea seriously. Go Hilton!