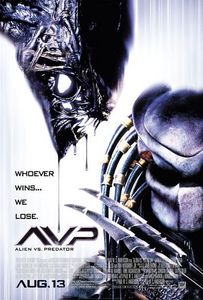 Combining the worlds of the Alien and the Predator has been in cult culture for a long time. Numerous video games, comics, novels. You name it. The universes had collided. The last frontier to be explored with this crossover was film, which is where the two foreign monsters were birthed ironically. Thusly, when it came time for the film, Fox put the highly anticipated picture into the watchful hands of writer/director Paul W.S. Anderson. Hold on. They let him write it too?! That's why we were given a visually slick, but poorly written action/sci fi film featuring two of my most loved film friends...the Alien and the Predator.

When a random burst of heat energy in the Antarctic circle draws the attention of Charles Weyland (Henriksen), he sets about to build a team of explorers to uncover one of histories oldest pyramids. Unfortunately, their expedition runs into an issue when they discover that the pyramid is used as a training facility for Predators (the universe's ultimate fucking warrior!) where they hunt the serpent like Aliens. Now it's a free for all with the universe's three most deadly creatures...and man is third on that list.

In all honesty, how can one not enjoy an "Alien Vs Predator" movie on some sort of level? The idea of combing the two universes is just so fucking cool. Anderson does do a few things right with this movie too. Despite his love of CGI (we all remember his bullshit version of Reptile from "Mortal Kombat" and if you don't...consider yourself lucky), he mostly sticks to the real thing here with kick ass special effects galore. The designs for the Predators is slick and the Aliens move and look they way they did decades ago. In fact, when he does use CGI it's a rather let down like the finale with the Alien Queen's rampage. Only occasionally is it forgivable, like when the facehuggers first burst from their eggs. Anderson has always been a man with an eye for visual flair and its all in spades here with set design, fight design, and special effects.

The biggest and heaviest weight that burdens this film is the weak ass story. For a person that claimed to be an expert in both franchises, he sure does fuck it up a lot. Some of the details are cool, getting the right sound effects and really building the concepts to get the universes into one plane (although he borrows VERY heavily from the comics), be he does mess up significant plot points. For example, according to the "Predator" franchise, the hunters only come during the hottest periods of time on Earth. So why the hell are they going to Antarctica? I know they give a lame explanation (it wasn't always so cold there when they built the pyramid!), but screw that. It's a basic principal of the series and they should have addressed it properly. Predators in the snow look cool, but that's far from a good enough reason.

The film also significantly lacks good heroes. When we talk about both franchises, they both successfully gave us deep and sympathetic protagonists. This one is far from it. Awful dialogue. Wooden actors. Poor development of character. Granted, when looking at an Alien and Predator film, its easy for fans to just root for our space monsters, but it would have been nice had Anderson took this as a call to arms to create a new hero to battle this generalization. Do we get a Ripley or Dutch? Hell no. We get a bunch of 2D 'beakers' that never rise to the occasion and just end up being fodder for the slaughter. Disappointing.

I really do want to love this movie. On some level I do. It's fucking Aliens and Predators! FIGHTING! How can I not love seeing that in some form? It just doesn't move me like the previous franchises did. It lacks a cohesive story line that truly embraces the two filmographies and it severly lacks protagonists. On the other hand, it's fucking Aliens and Predators! FIGHTING! Oh well. Torn I will remain for enjoying this film for its concept but hating it for its lack of depth.

BONUS RANT: I hate when they shorten titles. "AVP"? Seriously? Then of course, its not even a marketing gimmick. It actually says that on the damn movie! Oh for the love of Dutch!