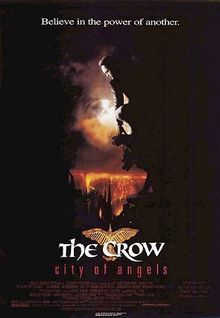 Ashe (Perez) and his son are killed by some conniving drug peddlers that are headed by one of the largest and strangest crime lords out there named Judah (Brooks). The heinous act is not overlooked though and a crow carrying Ashe's soul pities him and brings him back to life to take vengeance on those who wronged him. With the help of Sarah (Kirshner), now grown up since the first film, Ashe is out to bring justice to his son's murderers one by one and try his hand at toppling one of Los Angeles' largest crime lords.

The potential for a "Crow" franchise is vast. Allowing the mythos of returning souls given a chance to seek peace (with kick ass super powers attached) can go for miles. It can be in different times. Places. Different people. "The Crow: City Of Angels" may be half way across the US, but it barely goes past what we had in the first film. It treads the same damn ground. In fact, sans a rather odd and out of the blue final act including a transfer of awesome super powers, this sequel is the same damn thing as the first one. Almost the exact plot except that this one has no good character work, no acting, no solid directing, no charm, and a really poorly developed narration.

For a large budget theatrically released film, "City Of Angels" feels like a SyFy original. The poor lighting, color scheme, and set design (that's only further made cheesy and awkward by the immense amounts of silly fog) is atrocious. The script is so littered with plot holes (where are the police? Is the city abandoned? Why is everyone obsessed with S&M? That's just the beginning of a VERY long list...) that the film never bothers to explain shit about what's going on with anything. It doesn't even give the courtesy of explaining the crow mythos and how it works. Had you not seen the original film, then how would you know that The Crow is impervious to harm except through his crow? Hell, the character Ashe should be the one asking these questions and he just fucking goes with it as if its something you learn in grade school. SO FRUSTRATING.

Not only is the piss poor directing, writing, and design to blame, but the cast is down right awful. Perez looks fucking awkward with his flared out locks and belly shirt and none of the villains are remotely scary. A rare appearance from Iggy Pop as one of the lead henchmen is poorly wasted on bad one liners (Iggy Pop is truly scarier in real life then here) and even a minute role with resident genre badass Tom Jane makes me raise the quizzical brow far too often.

If you couldn't tell, I really do hate this film. It bastardizes the franchise and makes the concept seem like a silly and poorly developed fantasy tale. Everything about this film is below the bottom of the 'shit-o-meter' and it never could recover. The only reason this gets one star is for its rather impressive industrial metal soundtrack, which is matched poorly in the film anyway. Not recommended for fans of the franchise or for fans of film in general. Hell, I don't even recommend re-reading this review. Forget the film and move on with your life.

BONUS RANT: This film is good for some great unintentional laughs. The random things they use to shape into crows at each death scene is fucking hilarious. When I die, I hope my blood splatter shapes itself into a crow. Just saying.
Posted by DarkReif
Email ThisBlogThis!Share to TwitterShare to FacebookShare to Pinterest
Labels: Action / Adventure, Comic Book