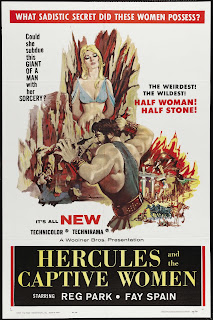 After Steve Reeves' two successful runs in the Hercules role it wasn't too long before other imitators started poking their heads in wanting a piece of the action. In comes Reg Park, arguably the second most popular actor to play Hercules, making his debut in the beefy role with "Hercules and the Captive Women". Though considered mistakenly by some to be a follow-up to Steve Reeves' films "Hercules" and "Hercules Unchained", it should be mentioned up front that this is NOT a sequel to those films. This is just another film with a different guy that happens to play Hercules... and not a good film at that.

Hercules becomes shipwrecked and ends up landing on a beach rescuing a princess from a funny looking, shape shifting monster. This island he lands on happens to be the lost continent of Atlantis and he throws a whole wrench into their system by rescuing the princess and killing the beast as the monster happened to be the son of some Greek God so the Island no longer becomes cloaked by fog. Hercules also discovers a play by Atlantis's evil queen to take over the world with her army of large brow boned blond warriors.

The plot to this film is completely disjointed and sloppy making for a laughable introduction for Reg Park in the role of Hercules. The opening is a jarring image of the history of the character that makes no sense and leaves the audience completely confused within the first ten minutes. Then Herc lounges around for a third of the picture, sleeping most of the time before landing on Atlantis where the film picks up a bit with exciting set pieces and some surreal dream like moments but overall it still tends to drag and the climax is full of unnecessary stock footage of a volcano exploding.

Reg Parks sure fits the role of Hercules as he is even mightier looking than Steve Reeves but the Hercules character is just written awkwardly by having him being lazy for the first half of the picture. Herc surprisingly seems oblivious to the evil intentions of the people around him and overall seems to more overall muscle mass in his head instead of a brain.

The production values are better than most other peplum films but that still doesn't make for a better film as this is amusing for all the wrong reasons and is definitely not a good place to start for people wanting to get into the genre. Reg Park's next Hercules film "Hercules in the Haunted World" is a much more enjoyable and better example of the genre.