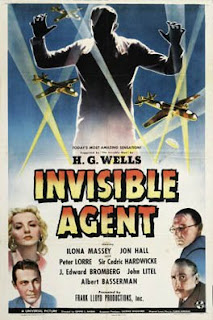 With World War II being at its height in 1942, Universal decided to take their "Invisible Man" franchise into a new direction by having their title character becoming a secret agent for the U.S. military. Considering I wasn't keen on the filmmakers comical approach with the last entry "The Invisible Woman" I have to say I was delighted by the new direction by taking the subject matter more seriously and giving it a new espionage twist. I mean who would make a better spy than the invisible man?

After getting threatened by German secret agents the grandson of the Invisible Man allows the U.S. military to use his families secret formula to obtain enemy secrets with one condition, that he must be the secret agent that goes in. So he is parachuted into Berlin where he meets up with an attractive young female secret agent. With her help he must avoid being caught and escape Germany alive with the secrets he needs to aid the allied forces.

Despite the novel idea of having the invisible man as a secret agent, the problem I have with this film is it reeks too much of a propaganda picture, a problem that plagues many war time films that were produced during the time the war they portray was raging. Is the propaganda element as bad as, let's say, John Wayne's "The Green Berets"? No, but it still concentrates too much on "America being great" instead of making a solid, interesting plot and characters.

The special effects are the highlight here (much like the other sequels) as they continue to get better and better with each entry. We even get to see the invisible man soap up his legs and arms which was an amazing effect at the time and even to this very day. We do get to see plenty of mono filament wire show up in the camera as it carries pieces of food and other items but that is easily forgivable.

"Invisible Agent" is better than the last entry as it tones down the slap stick comedy approach and the espionage element is refreshing but the cliché plot and overall propaganda feel hinder this from being as good as the first two entries. For fans this will still provide plenty of invisible entertainment value. Followed by "The Invisible Man's Revenge".

Bonus Rant: The filmmakers conveniently forgot the aspect that in the first two "Invisible Man" films the serum that renders people invisible eventually drives them insane. Also in the first film the invisible man states that after eating food, it is visible digesting in his stomach whereas here he eats with no worry of being seen. For a Universal sequel these continuity errors are rather small but they still are continuity errors none-the-less.

Written By Eric Reifschneider
Posted by Cronosmantas at 7:25 PM