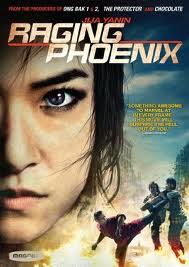 Thailand has quickly arisen as a place for some bad (but just as equally entertaining) Martial Arts flicks in the last few years. With a hero like Tony Jaa (from "The Protector") suddenly fleeing from his role as bad ass of the decade, there needed to be someone to step in. This would be Jija Yanin, a young female stunt extraordinaire. Although her first film to be brought to America, "Chocolate", was an exercise in stupidity marked with amazing fight sequences, her second film "Raging Phoenix" shows improvement as a film. Although very little, I'm afraid.

Deu (Yanin, but is credited as Yanin Vismistananda for some reason) is a girl with no family life and a sorrow in her soul deep enough to swallow mountains. When she is targeted for abduction by the mysterious Jaguar gang, she is rescued by a group of outcasts who happen to practice Meyraiyuth (a fictional Martial Arts style combining elements of drunken boxing, Muay Thai, and the break-dance flow of Capoeira). She falls into this group who each have lost something to the Jaguar gang and they begin to train her in the style so that they can find the gang's hideout and stop them once and for all.

Quite honestly, this film could have been very good. Mix a little of that lost soul that finds a way through Martial Arts, a bit of that gang related throw down like "Rumble In The Bronx", and some of that Thai classic beat down fighting and this should have been an easy win. Unfortunately, this film tries desperately hard to create a memorable and unique story with many scenes of dramatic tension mixed the an overly modern comic book style and look. BERRRRRRRRR! WRONG! None of it blends. The dramatic tension is way too cheesy and feels awkward. The comic book look and feel is lost about half way through and the memorable and unique story is completely bat shit nuts. The Jaguar gang kidnaps young women, takes them to their cave system (?!?!?!), and harvests their organs and tears to make perfume? I'm sorry. I need to take up drinking if that makes sense to sober people.

Luckily, like her previous film "Chocolate", "Raging Phoenix" is somewhat salvageable with some rather unique fight sequences. Our good guys have a very cool style of fighting, that being the fictional one, that has an almost dance like quality to it. The stupidity of some of the fights (guys with bladed pogo shoes? Seriously?) hinders the overall fun of the choreography, although making them fairly memorable, and some of the sets are obviously there for visual and action purposes. An underground cave where all the wood and rope bridges are only a few feet above one another? Come on, man!

Despite some cool ideas and interesting fight sequences, "Raging Phoenix" comes off just as mundane and pointless as its title. The acting has only its moments (actor Patrick Tang might have a very good future with the right direction though) and the story is so damn silly that it infects the fight sequences and prevents them from reaching their own awesome heights. Only slightly better than "Chocolate", I'm still waiting to see Yanin pull off the film to make her the next big thing.