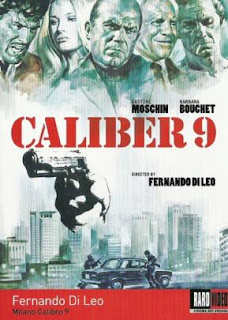 After the popularity of the Spaghetti Western began to fall out of public favor the genre morphed into the Poliziotteschi crime thrillers. Taking inspiration from the gritty American films "The French Connection" and "Dirty Harry", Poliziotteschi films were basically Spaghetti Westerns modernized into the 70s. Horses became cars and revolvers became machine guns. Many of the spaghetti western predominate actors and filmmakers jumped into the new genre head on and one of these men was filmmaker Fernando Di Leo. Though he dabbled in the Spaghetti Western genre by writing a number of features he finally got to direct his dream project with "Caliber 9", the first of his "Milieu Trilogy" which would be followed by "The Italian Connection" and "The Boss". For my money his "Milieu Trilogy" is to the Poliziotteschi genre what Sergio Leone's "Man With No Name" trilogy was to the spaghetti western genre. It's a bold statement I know but most fans of the genre will agree that Fernando Di Leo directed the most respectable films the genre has to offer with "Caliber 9" being his crown achievement.

Gastone Moschin portrays Ugo, a Mafia hitman recently released from prison. As soon as he leaves the prison he gets hassled by goons from his old boss about 300,000 lira that he supposedly stole. On the other side he gets hassled by the cops to get them information on his old boss. He hooks up with his old girlfriend (Barbara Bouchet) and somehow gets hired by his old boss. Can he find the people that took the money before he gets nailed by his boss or the cops biting at his heels?

"Caliber 9" is not your average Poliziotteschi thriller as it is much more serious and character driven then most of the other popular films in the genre. The acting here is surprisingly excellent with not a weak actor in the bunch. The standouts for me are Mario Adorf as a skeezy hitman and Frank Wolff as an eccentric, loud police commissioner. I've seen Frank Wolff in dozens of these genre films and this is by far his best performance that I've witnessed.

Fernando Di Leo's directing style is a lot more restrained and less flashy than his director brethren. His approach is much more standard with the focus of the film being more on the intriguing characters and plot. To be honest I do prefer my Italian films to be me more flashy in the directing department hence why I'm such a big fan of Enzo G. Castellari's and Umberto Lenzi's crime outings but there's no denying Fernando's characters and plot are much stronger and intriguing making for a much better, respectable film.

I can't say I enjoyed "Caliber "9 more than other films in the genre like "Rome Armed to the Teeth" and "The Big Racket" because I didn't. I enjoyed those films for different reasons as they were more over-the-top with violence and action with dynamic directing with flashy camera angles. "Caliber 9" is more classy, elegant and respectable as it focuses more on characters, plot and all around good filmmaking. For that I give the film respect and that is why I say it is, arguably of course, the best film the genre has to offer... just not the most entertaining in my eyes.