Hercules and the Tyrants of Babylon - 1/5 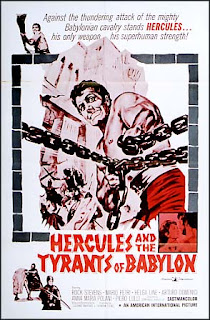 Another year, another forgettable Hercules peplum entry. This time the muscular role is portrayed woodenly by Peter Lupus, credited with the laugh enduing pseudonym Rock Stevens. With this walking piece of cardboard and plenty of stock footage your guaranteed another uninspired peplum film in a genre littered with such trash.

The story is basic and dull with Hercules running to rescue a queen hidden among an ocean of women from being tormented by sadistic rulers of Babylon. Thanks to plenty of stock footage from biblical epic "Sodom and Gomorrah" we get to see Hercules crumble the city of Babylon thanks to the city engineers stupidly building a turn wheel in a cavern below that with the turn of a mighty man crumbles the city to oblivion.

With a Peplum containing the character of Hercules one expects plenty of onscreen time with the mythical hero but the filmmakers here must have been aware Peter Lupus lacked the charisma and onscreen presence of other such actors as Steve Reeves and Reg Park as he really is only in the film for half of the running time with the rest focusing on actress Helga Liné. That's fine by me as she is jaw dropping gorgeous and definitely lights up the screen more than their embarrassing attempt at a club carrying Hercules that bares more resemblance to a grown version of the Flintstone's character Bam Bam.

The ONLY thing worth watching this uninspired Hercules peplum adventure for is beauty of Helga Liné as the story is dull, the title character laughable and the use of stock footage cheapening the whole effect. The film is easily found infecting plenty of bargain "Peplum" film packs available on DVD.