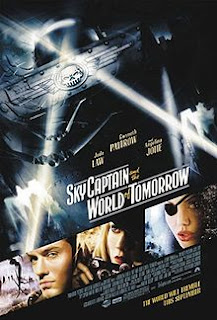 Is there ever films that you love the concept so much that you try to force yourself to like the movie just on that alone? That's how "Sky Captain And The World Of Tomorrow" felt like for me. The concept of creating a modern 30s style film that homages everything classic in film, whilst giving us a rousing good sci fi/action feature just tickles me pink. And that's why "Sky Captain" is so devastating for me to watch. There is so much I want to love about it, but it just feels so...depthless.

Joe (Law), the Sky Captain of a group of justice upholding renegade military types, has just been called back into action. All over the world a group of giant robots have been ransacking different parts and materials for some unknown reason and disappearing without a trace. With the help of Chronicle reporter Polly Perkins (Paltrow) - and ex-girlfriend - the Sky Captain is going to have to give chase around the world to discover a hidden plot by a maniacal doctor. This could be the end of the world unless Sky Captain can save the day once more!

The biggest issue that repeated itself over and over and over and over again with "Sky Captain" was that I was constantly trying to create the world of the film and failing. This mostly can be attributed to the fact that it feels like a sequel the entire time. We are simply thrust into this parallel world of 1939 and given no clue to the rhyme or reason of it. A lot of these details are homages to the classics (the separate military like group that Sky Captain leads for example), but I still wanted a reason. It's as if Conran (director/writer) was throwing random shit in there for giggles. Why the hell did the mad doctor create a world of new creatures? Why did he experiment on the people of Shangri-La? The characters are relatively flat and given no real back story to make us empathize (and enough with the he said/she said BULLSHIT with Joe and Polly! Just repeating it doesn't make it a good backing plot!) or understand who they are. I wanted something more about Sky Captain, like a flash back to why he is who he is, but he's left as this 2D character that we are simply expected to root for.

That being said, the style and little details that homage the 30s style film are lavishing to watch. The sepia tones, the use of shadows to light and dark, the swipes used as edits, the ridiculously over the top style of acting and look for everything, and of course, the badass sound effect of the robot's lasers. This is the reason to watch this film and it nails it. Although the plot wanders around like a lost cartoon on steroids at times (believe it or not I think they tried to over-complicate the story with too many twists and turns and I would have enjoyed it more had they stuck to a 'mad scientist with a doomsday device' initial plot line) its a fun visual ride that truly inspires one to look back on the 30s film culture.

As a result, "Sky Captain" becomes a film that sacrifices substance for style. The style is worth watching the film for any film fanatic and if you just sit back the film becomes a fun over the top ride. Unfortunately, when one tries to actually think about the film, it starts to crack under some faulty foundations of having us thrust into a world we truly do not understand. Trying to understand it is what makes "Sky Captain" fall apart and creates that disappointing rift this reviewer could not climb out of. It's a fun film, but not something I would call 'instant classic'.

Written By Matt Reifschneider
Posted by DarkReif at 10:31 AM