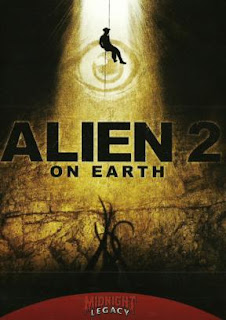 In the realm of unofficial Italian sequels to American films there is what I consider the holy, or perhaps better described as unholy, trinity of 'sequels'. The first and most popular is of course "Troll 2" which in itself has become a huge cult favorite here in the States as of recent and desirably so as it is delightfully absurd. The second is Bruno Mattei's "Terminator II: Shocking Dark" which has yet to get a stateside release. The third is the 1980 film "Alien 2: On Earth", a so-called follow-up to Ridley Scott's groundbreaking film "Alien" and until recently was the most hard to come by of the three as it only got a VHS release in a handful of countries. Now thanks to Midnight Legacy we fans of cult cinema can finally get to see this obscure film which most cult fans knew about but few had actually seen. Well after finally seeing this hard to come by picture it's easy to see why it was so damn obscure and hard to get as it is fucking terrible, and not in the likable "Troll 2" fashion.

Despite its title the plot has nothing to do with Ridley Scott's "Alien." That masterpiece was a futuristic space film where this puddle of alien piss takes place in modern 1980 and thanks to our subtitle we know it takes place on Earth. The clunky, stock footage filled introduction tells us, very clumsily, that a space capsule is on its way back to earth. It seems to have carried an Alien rock with it which somehow falls into the hands of a group of cave explorers. The explorers bring the rock into a cave their exploring only to have the rock "hatch" unleashing a monster that starts killing them off one-by-one.

The narrative of the plot is appalling. It's sloppy and confusing and most audiences will be lost within the first 15 minutes on what the fuck is going on. The abundance of muddy looking stock footage and long drawn out boring sequences of characters walking, driving and pointlessly talking only serve to confuse and put the audience to sleep. The worst sequence has to be when our explorer group get prepped for their exploration by going bowling which just drags on and on and on.

To go along with the detestable plot narrative is a plethora of plot holes and aspects that are never explained. Where did the astronaut crew pick up the "alien" rocks. Why does our head cave explorer suddenly have psychic abilities (and why didn't she see the alien onslaught coming?). Why does the alien eat off people's faces only later to have their faces be intact? Why the hell did the director think this film deserved to hold the "Alien" title? Why the hell was this movie ever made?

To go along with the poor plot we get loathsome directing which is amateurish at best. I guess it matches the director's writing as director Ciro Ippolito, hiding under the pseudonym of Sam Cromwell, is guilty for both credits. The Alien itself is another point to bring up as it the special effects are shoddy and the alien is rarely shown. Most of the time we are given an Alien POV shot which looks like we're looking through the alien's asshole.

I am fan of bad Italian films and it pains me to say that "Alien 2: On Earth" is a complete waste of time. I can't think of one measly aspect to praise the film about as nothing, absolutely nothing is good about it. It's not even good by bad Italian movie standards. Everything from the score to the effects to the plot is downright atrocious. Atrocious, now that's good word to sum up this film. As a matter of fact they should have called this film "Atrocious". The films only novelty is its title and curious film goers like me are bound to pick it up but trust me when I say that this is the WORST "Alien" rip-off I have ever seen... and I've seen a lot. If you want a bad yet insanely entertaining Italian "Alien" rip-off then hunt down Luigi Cozzi's "Contamination". Now that's a bad film that was worthy of the title "Alien 2."

Written By Eric Reifschneider
Posted by Cronosmantas at 9:28 PM