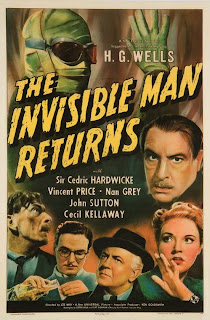 Seven years after their hit "The Invisible Man", Universal found it due time to produce a sequel so it could brood into a franchise along the lines thief "Frankenstein" and "Dracula" series. Don't believe me this is a sequel? Fuck then watch the opening credits as it even says "a sequel to 'The Invisible Man'." Shit like the "Returns" in the title wasn't enough to hint at the fact.

Well the Invisible Man's brother from the original film (Universal's sequels always seem to be wrapped around family members of previous characters) is toying with his invisibility formula to help a friend break out of prison who has been wrongly accused of Murder. Our fugitive (played by Vincent Price) now must use his invisibility to learn who really committed the crime and clear his name before the formula drives him mad.

There were some big bandages to fill due to Claude Rains brilliant voice and body acting in the original but Universal found more than enough competent replacement in the form of Vincent Price. Though we don't get to see him until the final reel, his voice acting is superb here proving he has one of the best set of pipes in the business. His version of the title character is also a little different as he doesn't descend into to madness right away. He's calm, confident and all around a nice guy. Still we get to see him slip into megalomania towards the end and Price's acting talents are really put on display.

Compared to the original this lacks the wit and overall wonderful filmmaking aspect that James Whales brilliantly displayed. Still the acting and special effects are still top notch no doubt wooing the audience for a second time around and director Joe May does a competent job at making a decent sequel.

For a sequel this is pretty good, a little standard, but very entertaining none-the-less and should please fans of the original as long as they go into this sequel not expecting the greatness the original was able to convey. It's definitely better than most of the other sequels that Universal was pumping out by this time in 1940 and would be followed by another sequel the following with "The Invisible Woman."