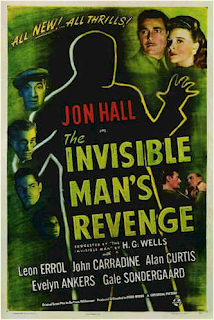 With the notion of "insanity" lacking in the last two entries, Universal makes up for that fact here loading up on the madness of our invisible title character. Not only does the invisibility formula drive him mad... he's mad to begin with! For that aspect alone I was going mad into this fifth and final entry into Universal's long running "Invisible Man" franchise.

After killing to escape from a hospital, a mentally ill explorer travels to his partner's house in order to collect the half of the profits they found when they discovered a diamond pit in Africa. After an accident his partner thought him to be dead and even worse he spent all the money by losing it in bad investments. This angers our mental patient to no end and after being thrown out he is taken in by a scientist down the road who just happens to be working on an invisibility formula (no connection to previous scientists in the past entries are mentioned). He volunteers for the experiment to make him invisible and soon heads out to extract his revenge on his old partner by extortion and even murder to get his just half of the profits.

I really got involved with the sheer madness of our main character as he would really do anything to get his half of the money! With him being so evil the film really lacks on the other side as there truly isn't a hero to balance the character out. There is literally no one to root for to stop the madness of our invisible man. Even the worst slasher films attempt to make a hero but not here and the film suffers for that fact.

Like the other entries the special effects are the real highlight and the effects displayed here are the best of the series. Now we get to see the invisible man disappear while in motion and even see him with water splashed on his transparent face. For the time these effects were breathtaking and even look more realistic than the effects in such modern "Invisible Man" films such as "Hallow Man."

Without a true protagonist to root for this sequel ends up coming up short but still manages ti be ab entertaining final film into the franchise. This however wasn't the final appearance of our hallow character as he would make a cameo appearance in " Bud Abbott and Lou Costello Meet Frankenstein" and finally in a full fledged comedy spin-off with "Abbott and Costello Meet the Invisible Man."