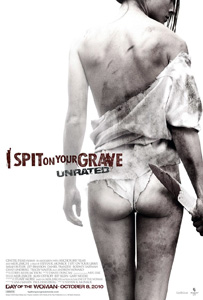 Love it or hate it, "I Spit On Your Grave" is something of a cult classic. Whether it deserves it or not (much upon your own belief in what the film actually accomplishes), the original shocker was just enough throught and more than enough gratuity of violence and sex to garner it a lot of discussions and bans. When you have a film that controversial there is only one way to treat it decades down the road. REMAKE MOTHER FUCKERS!

Thusly, we are treated to this modern take on the female revenge tale. Although it improves on the original in many aspects, this film still struggles from the same flaws that hindered the original, making it a good (and gruesome) film, but not to the greatness it could have been.

Jennifer Hills (Butler) seems to be on the right track. She's about ready to start crafting her second novel and found a smokin' deal for an isolated cabin in the woods to start writing away from her New York home. What she doesn't count on is a group of local yokels deciding that she deserves to be punished for being a 'big city whore'. After significant mental, emotional, and physical abuse, she is left for dead in the river. Is she dead though? Is she? Maybe she just might have survived and is out for their blood in all the worst ways. Wouldn't that suck?

As one can probably guess, this is essentially a modern Grindhouse flick. With a simplistic tale as that synopsis describes, this film sincerely focuses on the intense situations and brings to light the horrid things that mankind can do to one another. In this way, on the surface, its understandable why many people don't like "I Spit On Your Grave". The sheer terror that this film portrays is stomach wrenching and the execution on screen of this is a fascinating stroll into pure humanized horror. This is where the remake actually trumps the original. The acting and directing are superb. Although it does lack that 'Grindhouse' look due to this, the empathy that one feels for Jennifer in the first half of this film is truly horrific. With a solid sense to build the tension, isolation, and dire stakes at hand, this film does this aspect of the film so well, that it hurts to watch.

Unfortunately, this film falls prey to the same pit fall that befell the original. The second half lacks a lot of the tension that the first half does so well. It sort of becomes a less than realistic torture film with over the top death sequences (of course the ax in the boat from the original one was cheesy, but corws eating out a man's eyes isn't far off) that lacks the punch it should have had. Not that one doesn't get some sort of gruesome enjoyment at how she roundabouts their deaths to what they did to her, but it just seems to miss some of the depth it should have had.

"I Spit On Your Grave" has a massively well executed look and style to the film, but it ultimately collapses under the script's faulty foundations. I just wanted this film to improve on all aspects from the original and not just some. Give us something more to root for or more of a stake towards the end. It just doesn't happen unfortunately and it leaves "I Spit On Your Grave as a good modern Grindhouse, but far form the impactful experience it could have been.

Written By Matt Reifschneider
Posted by DarkReif at 10:42 PM