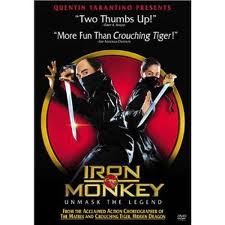 Despite having one of my favorite actors in it (Donnie Yen) and being hand guided to the American film going audience by Quentin Tarantino, "Iron Monkey" remained elusive to my viewing. This particular statement was spurred by my waiting for the original version of the film (rumor has it the American version is heavily changed) to be released here, but alas it just became too long of a wait and I finally caved in. Turns out even in this Americanized format, "Iron Monkey" is a blast of old school kung fu done with a modern touch that pleases fans of the genre. "Iron Monkey" is a hell of a fun-fu flick.

Dr. Yang (Yu Rongguang) is a kind doctor who has been treating the residents of a corrupt village. The governor handedly wastes money and hordes it from the people with little in the way of resistance. Now, during the nigh, Dr. Yang, with the help of his lovely partner Miss Orchid (Jean Wang) robs the rich to give to the poor as a highly skilled martial artist known as Iron Monkey. When a medicine man visits from a far (Donnie Yen), he and his highly trained son Wong Fei-hung (Angie Tsang) are used to find Iron Monkey.

Director Yuen Woo-Ping (known for working with Jet Li in multiple assets and as the fight choreographer for numerous films including "The Matrix" and "Kill Bill" in America), really knows how to keep that classic kung fu style even in modern times. The fists and feet fly with rapid intensity through numerous memorable sequences as we get all kinds of classic combat situations. It's gloriously over the top with its acting and fight style (Woo-Ping loves to have his fighters be able to do super human feats of strength and agility including leaping at great heights and balancing on heads) while it still retains much of the golden moral lessons as the classics did. As a recent classic kung fu film, "Iron Monkey" flies off the hinges in awesomeness.

One aspect of "Iron Monkey" that seemingly falls flat, is its political and social satire. Supposedly in this American version of the film, most of it was cut out for fear that audiences would fail to get it (being as it was theatrically released in the US they were probably right), but it leaves the film feeling a bit hollow at times. As if there was more to it then there is. Even the comedic bits, most of it being satirical towards politics and the situation, feels heavily edited. Although it was a smarter move for Miramax to do so for its release, those of us who do care would love to see what was changed put back in for what would probably be a better kung fu movie experience.

As is, "Iron Monkey" is still a great film that fires on most of its cylinders to create a memorable and exciting watch. It's stylish in its presentation with amazing over-the-top fight sequences and borderline mythological plot points that really make for a fun 'another time, another place' story. Woo-Ping does it ably and with a little help from producer Tsui Hark, they create a great film. Highly recommended. Let's just hope we see an 'uncut international' version sometime in the future.

Written By Matt Reifschneider
Posted by DarkReif at 9:52 PM