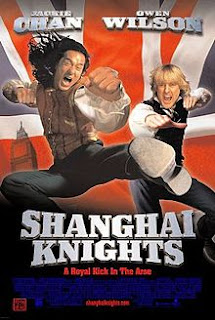 Although a sequel was a given considering the box office success of "Shanghai Noon", this essential rehash of the first film does do itself some justice. Although it lacks in almost every layer to its originator, "Shanghai Knights" still retains some of that great chemistry and cleverness to make it worth the watch. Although the film is inferior, its hard not to smile through the entire experience if you take it for what it is.

Chon Wang (Chan), now a sheriff in Carson City, receives a disturbing letter from his sister in China. His father has been murdered and she has chased the murdering party all the way to London. So Chon hauls off to New York to get his money that his partner Roy (Wilson) has supposedly invested. From there, the two set off to London to recover a stolen Imperial Seal and deal out a bit of vengeance to this murderer. What they find in London is a bigger conspiracy that threatens the rule of both England and China.

Ironically, the same foundation that the first one was built on (outsiders trying to cope with unusual lifestyle of a new land) doesn't work near as well here. It's partially because we are now playing with three cliche characters (China, USA, and England) that exemplify their area. This does work at times and with many moments, including a very humorous sequence where the two sneak into a high class British party, but more often than not it simply doesn't have the polar opposite effect that worked for the first. Many of the British tidbits they throw in are hilarious (including a short scene with Jack The Ripper) and highlight the general choice for location.

Having the location change does allow some new and very cool fight sequences to occur. A fight scene with an umbrella highlights these, but most of them work to relative success. Most of the fights are far from being as memorable as they could have been (the fodder for using this time period in England doesn't promote the best settings or objects for the fights) and although they are still fun, its not near as clever as it could have been.

The duo of Chan and Wilson do return to some solid moments too. Although the plot tends to have them repeat the same damn character arcs we surveyed in the first one including some very similar scenes with one getting their feelings hurt yadda yadda, but their chemistry still works in spades. The best parts are when they bicker and banter about things and this leads to some great moments like when Wilson starts throwing beer bottles at Chan. The duo works well on screen, but it would have been nice to see them cover new ground for each.

In all honesty, I like "Shanghai Knights" for its moments of humor and being able to watch Donnie Yen and Jackie Chan throw down (its a kung fu guys dream come true even if its short lived and relatively uneventful), but the film isn't near as funny or as action packed as the first. It's a good sequel but a far cry from the cleverness it should have been.   Mostly for fans of the original and not much past that.

Written By Matt Reifschneider
Posted by DarkReif at 9:03 PM