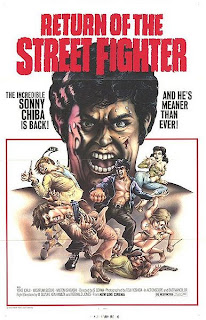 The original "Street Fighter" rocked my socks off with its hardcore, violent martial arts display. I had never in my life had seen such a violent karate film. It's over-the-top exploitation elements and Sonny Chiba's riveting anti-hero secured it in my top two favorite martial arts movies of all time. Due to that I had to calm myself down before going into this sequel. I knew it wasn't going to be as good as the original (sequels very rarely are) but I still had to pull my expectations down. I must have succeed as this sequel was pretty damn entertaining, not as good as the original as expected, but a solid violent sequel that lives up to the original.

Our street fighter this time takes on a Yakuza family that may be embezzling money from charities in order to finance their own operations. He becomes the target of both the mob and the police but nothing will stop him, even and old enemy that surprisingly returns after our street fighter ripped his larynx out.

The story is not as good then again we must have the mentality that this is an exploitation martial arts film. The plot isn't going to be great. We see these for the over-the-top violence, martial arts, and great anti-heroes. One aspect I didn't like about the plot is the addition of a new annoying sidekick. Drop that sidekick shtick like a bag of shit please!

Though the tagline promises that our street fighter is "...meaner than ever" I found him to actually be much softer, more compassionate and lacking a lot of the anti hero elements he portrayed in the original. The street fighter is supposed to be a character of respect, yet fear and grotesqueness at the same time. He just doesn't quite match the overall nastiness the character had in the original.

The action and martial arts sequences also lack the gore and viciousness of the original. Don't get me wrong as this is still VERY violent, just not to the extent that the original displayed. The violent fight highlight has to be a fight on a snowy peak which Chiba punches the back of a guys head which causes his eyeballs to come popping out. I also dug a scene where our street fighter punch a guy with a pistol, stabbing the barrel into his bloody stomach and then shooting him.

Chiba's character may be softer and the film overall lacks some of the violent nastiness of the original but overall this is a good sequel that stays true to its origins and I see no reason why fans of the original wouldn't enjoy this outing. The sequel did have a strong box office performance so a third film ("The Street Fighter's Last Revenge") and a spin-off ("Sister Street Fighter") got released the same year.