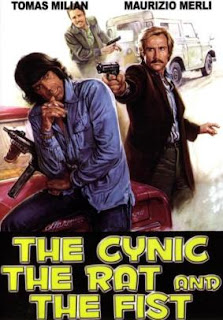 "The Cynic, the Rat and the Fist"... what a title. It reminds me of another famous film... hmm... what could it be. Perhaps "The Good, the Bad and the Ugly"? Is this similarly titled Italian crime action thriller going to live up to the reputation of the more famous spaghetti western that inspired it's namesake? That would be a negatory but as a sequel to the enjoyable Poliziotteschi "Rome Armed to Teeth" this is an entertaining slice of Italian crime pizza.

Maurizio Merli reprises his role as Inspector Leonardo Tanzi except this time he isn't an inspector. It seems after the events of "Rome Armed to the Teeth" Tanzi grew sick of the backward legal system being "kindhearted" to the corrupted fifth tearing apart Rome and has resigned and now makes a living writing detective novels. All is going well until one of his arch rivals known as "The Chinaman" (Tomas Milian) gets released from prison and sets his sights on getting revenge. After a failed assassination attempt on Tanzi, the police send him away to avoid being murdered but Tanzi decides to take vengeance himself. Tanzi decides to pull a "Yojimbo" (or a "Fistful of Dollars" if your more of a western fan) by setting up The Chinaman against his mafia business partner Frank Di Maggio (John Saxon). Knowing director Umberto Lenzi's hyper violent style it's safe to assume the streets of Rome are going to be running red.

The filmmakers decide to mix up Merli's role here a bit by not having him play an inspector, commisioner or anything cop related. He instead is an ex-cop going vigilante to save his ass. This new approach to the typical Merli character was refreshing but I would be lying if I didn't miss his confrontational arguments with his superiors about his violent ways.

It's also nice to see Tomas Milian return but don't be confused as he doesn't play the same hunchbacked villain he did in the previous film "Rome Armed to the Teeth." When I first saw this film a few years ago I actually thought he played the same character. Yes I know he got shot with a machine gun in the back at the end of the last film but this hasn't stopped character's in Italian crime thrillers from coming back before. Merli's character in the "Inspector Betti" trilogy got blown away with a machine gun at the end of the first two films yet managed to return unscathed in the next entry. But alas I digress as even though Milian's "Chinaman" character isn't the same as his hunchback villain he still plays both roles very similarly; both are slimy, despicable characters willing to blow anything that gets in his way for personal gratification. Why is he called "The Chinaman"... not sure as Milian sure doesn't look like he has Asian heritage. It's like calling Clint Eastwood's character "Blondie" in "The Good, the Bad and the Ugly" despite obviously he doesn't have blond hair.

Umberto Lenzi is back to his violent ways as he loads up the film with exploitation goodness in the action department but he does inject a little more humor than he did in his previous Poliziotteschi crime films. Some of the humor works and some doesn't (like Merli making a goon say "cheese" before hitting him with a camera).

Compared to Lenzi's previous 3 poliziotteschi films "Almost Human", "Rome Armed to the Teeth" and "Violent Naples" this comes up a hair short. The added humor mostly works against the powerful exploitative action scenes but overall it is still an entertaining, tasty edition to anyone's Euro Crime collection. The best DVD edition available is a release from Alfa Digital Entertainment which can easily be obtained through amazon.com, eBay or by special order by our friends at Plausible Denial Productions.

Written By Eric Reifschneider
Posted by Cronosmantas at 3:55 PM