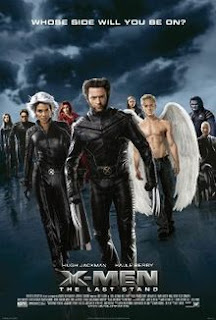 After kick starting the comic book to film trend once again with the debut film of the franchise and then essentially tightening all the loose screws for "X2", this blockbuster franchise decided to take a giant crap for the third film. Perhaps I'm a little harsh on this entry, but after viewing the stellar second film and seeing "X-Men: The Last Stand" its hard not to be hurt and disappointed as a fan. It's unfocused, too visually concerned, and tries to pile as much plot into a two hour film as in-humanly possible creating a giant cluster fuck of a film that looks cool, but rarely does anything beyond that.

With Jean Grey's (Janssen) death hanging heavy on the heart's of all the X-Men, Wolverine (Jackman) returns to Xavier's (Stewart) school to help out while Cyclops (Marsden) copes with the loss of his love. To make matters even more complicated, a pharmaceutical company synthesizes a 'cure' for the mutant genes to allow all mutants a choice. This enrages an already pseudo-crazy Magneto (McKellen) who vows to wage a war on humanity if the 'cure' is not destroyed. Now the X-Men must choose a side (with Magneto's new army growing steadily) and with the sudden resurrection of Jean Grey as an instinctual and all powerful creature The Phoenix, it just might be the last choice these mutant heroes will get to make.

There is just too damn much going on in this movie. It tries to splice together two very epic comic plots, that of Leech (the boy who's DNA creates the cure) and that of The Phoenix (Jean Grey's resurrection as an all powerful entity) and by sacrificing elements and details from each to make them work together, it does neither justice. Both arcs give the opportunity for great character work and meaningful symbolism, but the film desperately tries to mesh them together and forgets the details that made them fan favorites. When Cyclops dies (oops, spoiler!) its as if it affected no one. Not even the audience. That connection is what this film severely misses.

"The Last Stand" also suffers from way too many characters. We are given glimpses of tons of new mutants (Kitty, Colossus, Angel, Beast, and the list goes on) who are all part of the main story, but none of them get the character arc attention they should have. One assumes Angel is to play a major role with his origin coming on early and his escape to freedom being one of the cooler scenes, but then he's just left to drift off into nothingness. Don't ignore Ben Foster! He's too good for that! All of the character's are treated like this too. Even the major ones, like Storm, have no character path at all in this film. It's as if they began mashing in too many to give them their due and it hurts that symbolic and human part of this film.

With that much ranting about what this film fucks with, I do have to admit that the action is pretty good. Irrelevant for the majority of the film sans the final showdown, but well paced and visually solid. You get some solid Wolvie claw action (against a guy with stick knives that he throws?!) and a pretty awesome show down at Jean Grey's old house with the much anticipated Juggarnaut (Bullettooth Tony...err...Vinnie Jones) taking on the adamantium structured hero. Unfortunately, that's all that this film has going for it is some great action sequences.


"X-Men: The Last Stand" is just a ridiculously over complicated (and thusly, rushed) plot that has some solid action moments. Everything else is pushed to the side to get the plot moving, like characters, symbolism, and meaning, and the film seems to try to splash in some nice throw downs in the midst. Let's hope this isn't the final full X-Men film out there (we're not counting all of the spin offs including "Wolverine" and the upcoming "First Class") cause its a massive let down.