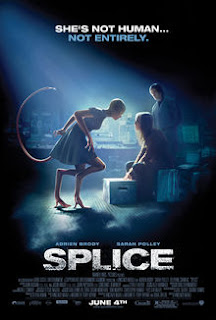 Despite a slew of mixed reviews after its initial release, "Splice" made its way into this reviewer's queue when I realized it was directed from the guy that gave us the modern sci fi classic "Cube". Although the trailers had me a bit excited, when word spread out about how mixed it was, the film quickly fell down on my list until now. Yet, somehow, I sort of wished it would have fell further as this basic rehash of the cult film "Species" rarely goes where it needs to for it to be the memorable and impactful experience it should have.

Awesome to the nerd degree scientist couple Clive (Brody) and Elsa (Polley) are on the brink of some serious scientific breakthroughs. They are the world's most badass splicers (combing genes from various animal's DNA to create new hybrids) and their work is suddenly being halted as the pharmaceutical company that is sponsoring them pushes forward to make their work profitable. So they decide (after much useless debate) to move forward into some gray territory and start to make something with human DNA. The result is a hidden from the world human/creature named Dren. The problem is that Dren is going to start some serious shit. And not the political kind about using human DNA to create life. She is about to push the limits of this couple to the edge.

The initial premise of "Splice" is an intriguing and well crafted one. Despite its rather close resemblance to that of a cheesier and less realistic "Species", "Splice" plays on the fears of how far science will go to some solid reactions. Natali does a solid job making the film feel pretty damn realistic with its use of scientific jibber-jabber and atmosphere. The art design is well done and the creature design is spectacularly efficient as we watch Dren grow into a full 'woman' and beyond. These parts of "Splice" make it worth the watch for sci fi fans around these parts.

The problem with "Splice" that undermines the entire experience and how the film plays out is its rather unfocused and 'plays it safe' style. The entire film tries to play up the moral issues of its premise and how it affects our leads, but rarely did I feel that moral 'horror' myself. The arguments they have and the points that they bring up seem to left as an after thought to the visual and atmospheric show. When the film does really decide to push into over drive with the consequences of such actions, it falls into a feeling like a schlock film. Random sex scenes (that hint at the same issues that "Species" focused on with its plot), the more horror inspired final act - that, oh yes, contains a rape scene - and the violence seems almost out of place. As if the smarts suddenly gave way and just took a pass on the final moments. It plays it far too safe with the concept for the first two thirds of the film and that makes the final act come out of left field.

"Splice" is a great concept with some solid execution that needed to figure out what it was to begin with. It feels like a smart and atmospheric sci fi flick for its first chunk (that plays it a little too safe with its debates) and then dives straight into schlock horror territory for its final act. The two parts just didn't piece together well and it leaves one disappointed with the results. The potential for something impactful with its story never seems to fully form in the film and ends up having to rely on shock factor to push its point across leaving one wondering as the credits roll "what did I just watch?".

Written By Matt Reifschneider
Posted by DarkReif at 2:33 PM