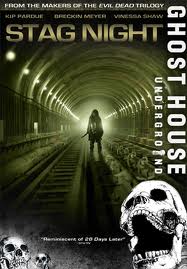 Despite starting out on the right foot with some serious John Carpenter inspired score over the opening credits and having a cast of cult film add on actors, "Stag Night" quickly goes 'stag-nant' in this relatively rehashed film. Although it has a bit of charm to its low budget finesse, the lack of consistent pacing or purpose tends to make this Ghost House Underground release fall flat and makes for an unmemorable time in front of the television set.

After a night at the strip club for Mike's (Pardue...that guy from "Rules Of Attraction"!) bachelor party, four guys (including Scott Adkins, resident badass and ninja and Breckin Meyer...that guy who fought a video game Freddy in "Freddy's Dead"!) and two strippers find themselves lost in the underground railways. When they witness a cop get brutally murdered by three Rob Zombies...err...homeless and super violent men, they have to run for their lives and find a way out before they find themselves in the hands of CHUDs....whoops, I mean Rob Zombies...dammit! Hobos or whatever.

In all seriousness though, the first portion of this movie is actually pretty good. It kicks off with that Carpenter score, it builds this great character interaction with the four guys and the two strippers, and it establishes a solid atmosphere with the setting and time of day. It has this great build that many horror movies seem to lack anymore, and if there is one thing that makes this film worth the watch, its how this is done.

Unfortunately, from that point on, the film slowly circles down the drain into unmemorable obscurity. The plot quickly fizzles into a mish-mash of slasher and hellbilly cliche's as our team inexplicably take detours and perform idiotic feats to get themselves killed. The high intensity sequences will give people motion sickness as the camera bounces at a frantic pace in the low lit setting, not allowing a single soul watching it to actual see what's going on. Then the plot seemingly just forgets that it needs to be memorable by having insane hobos as the villains. The moments where they could have built some sort of mythology to script (how the homeless people seem to use these violent folk as police or the weird trailer with the TV and mannequin) are left under huge question marks and no hints to their inclusion for the film. The film quickly becomes frustratingly cliche by its end.

With such a promising start, its sad to see "Stag Night" collapse into itself as it plays on. Despite some solid casting choices (I'll watch anything with Adkins!) and some good initial set up, this film just...well...kind of sucks. Too cliche. Too open. One of the oddest choices for Ghost House Underground for sure.