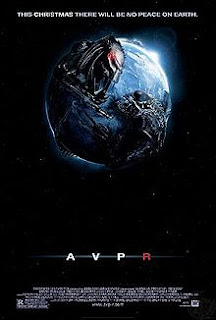 When one realizes that they fucked up the titled for this film (this one being "Aliens" and the first one being "Alien"), its hard to have hope for it even though one would think they should have learned from their previous film. It's this lack of hope and dire depression that make "Aliens Vs Predator: Requiem", sometimes abbreviated as "AVP:R" as if that's easier to say or type, a great film to laugh at. Yes, to laugh at. Not to laugh with. Once again, even with Aliens and a Predator throw down (and the appearance of the Predalien) this film fails on almost all aspects and comes off as an incoherent, protagonist-less, and often poorly lit film that simply fails to improve on anything from the original.

After the Alien youngster pops from the chest of the dying Predator at the end of the first spin off, there is all sorts of shit that goes down on the Predator ship. Including shooting itself down into a crash landing in Colorado. There some facehuggers get out and under the watchful eye (that's awkward) of the Predalien, they begin to infect the small town population. On the Predator home world, one badass Predator is sent to clean up. Oh. And some people get caught in the middle, but really...who gives a shit. We get more beat downs between other worldly creatures!

After re-watching this film (believe it or not I saw this in theaters the first time), I still have significant trouble trying to logically put this film together. It's just a mess of plot that rarely makes sense half the time. Our human protagonists, and there is a lot of them, are all weakly constructed, poorly acted, and rarely sympathetic to the audience. The "Dawson Creek" bullshit that was 'back story' was achingly cliche (about as cliche as a wide range of people) and the plot has to move at lightning pace to pack it all in, never giving us a chance to give a shit. Just like its predecessor, "AVP:R" (cringe) seriously lacks strong leads and heroes to root for. When the character Jesse bites it, I have to admit, I laughed my ass off. That's not how it should work, folks.

The rest of the film rarely does anything for me either. They finally got an 'R' rating for this one and then they seemingly throw in gore for the sake of gore. Don't get me wrong, I love me some gore, but here its a whole lot of nonsense. The special effects are good (this gives the film a half star!) and its still bad ass to see a Predator throw down with the Predalien (that's the other half!), but the poor lighting make for the gore and action sequences to be a rather blurry experience. It's hard to appreciate some great monster fights when you're squinting the entire time.

Although it was nice to see more Predator and Aliens on film again, even nostalgia couldn't save this film from circling the drain. It's got a couple of solid moments (mostly ruined by nut-punch worthy dialogue or horrid lighting), but its lack of a cohesive narrative and by the numbers music video directing make it a film that's hard to sit through. Like the first, take a moment and have a good laugh at its expense, knowing full well that despite its stupidity it still made a shit load of money continuing to fuck with our beloved franchises. Might as well laugh, otherwise you just may cry.

BONUS RANT: What the hell is with the impregnation that the Predalien preforms to create more of its kind? Is it a Queen Alien mixed with a Predator? Why would the genetic make up suddenly change like that? IS THAT HOW PREDATORS REPRODUCE?! WHY AM I YELLING?! FUCK LOGIC! JUST GO WITH IT!

Written By Matt Reifschneider
Posted by DarkReif at 11:32 PM